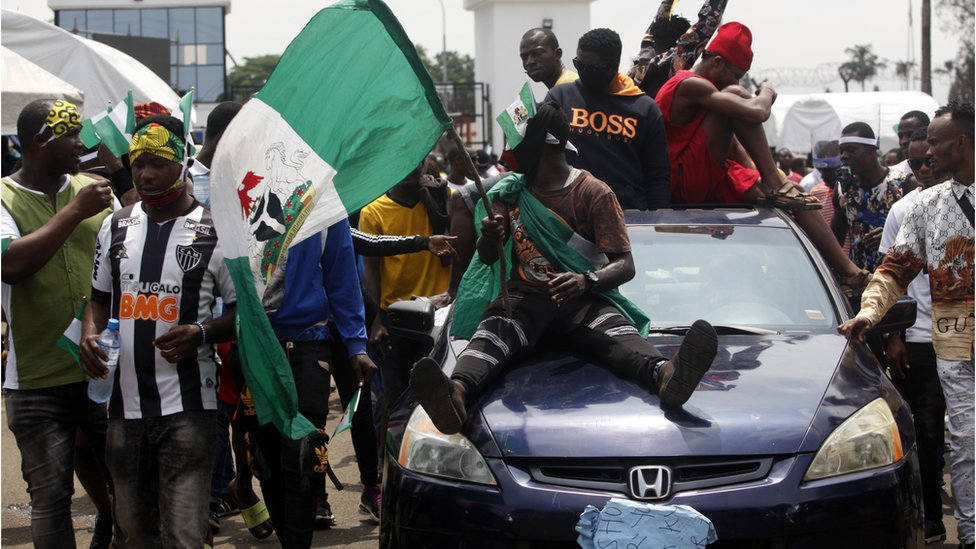 Claim: Some Twitter users claim that holding the Nigerian flag by protesters will prevent soldiers from shooting them.

No Evidence. There is no evidence to back up the claim.

Since thousands of Nigerians started calling for the end to police brutality and total reform of the Nigerian Police, there has been a lot of information circulating in the media space. One of the viral ones is the claim that holding a Nigerian flag during a protest will prevent the Army from shooting. According to some of the tweets, the information was

given by a retired colonel.

Moore’s tweet reads; “They plan to deploy some Nigerian Army to stop protesters. Pls everyone should get a Nigerian Flag because no army will dare shoot at any Nigerian holding a flag. Advised by a retired Colonel It is a military code. #ENDSARS #EndSarsNow #BetterTogether.”

One of the respondents to Moore’s tweet wrote; “Time to mass-produce the flag for all peaceful protesters.”

Another twitter user, Charly Chap (@CharlyChap2) also posted; “All Protesters should get hold of a Nigerian flag. No military formation will move against a crowd of Nigerians waving the Nigerian flag. Get your Nigerian flag now. Please spread the news.”

Since the emergence of this information, Dubawa has observed that many Nigerians  havefollowed the instruction by holding the Nigeria flag during protests.

A video footage posted by Omoyele Sowore (@Yelesowore), a former presidential candidate, shows thousands of protesters holding Nigerian flags while calling for the end of police brutality and a total scrapping of SARS.

Todayfm reached out to a retired colonel, Chinedu Owhonda, to ask questions on the circulating information.

Col. Owhonda  said there is no such rule and that neither  is there a written constitution in the army that restricts the soldiers from shooting protesters holding Nigerian flags.

He said, “for the benefit of doubt, your country flag has a representation and the symbol is “you respect it by not harming anyone with the flag, but I have not seen it written anywhere that anyone holding the Nigerian flag should not be shot”.

Owhonda told Dubawa that the flag symbolises something and there is no harm that will be made to somebody who identifies with it,  “For instance, during the war if you enter a church or a mosque, in the conventional setting, no one can kill you.”

A check by Dubawa indicates that there is no record where Nigerian flag prevented the Army from shooting protesters.

During the #EndSARS protest in Lekki toll gate on October 20, 2020 despite unarmed protesters holding the Nigeria flag and singing the National Anthem, military officers still attacked and killed several persons and left many injured.

What the law says

The Nigerian constitution and the Armed Forces Law do not have a provision that holding Nigerian Flag will prevent the Army from shooting, a check by Dubawa shows.

Section 217 (2) (c) of the 1999 Constitution (as amended) provides that Nigeria’s armed forces shall suppress insurrection and act in aid of civil authority to restore order when called upon to do so by the President, commander-in-chief reinforced by Sect(8) (1) and (3) of the Armed Forces Act, Laws of the Federation of Nigeria, (LFN) 2004 requires the troops to use necessary force to quell crisis resulting in deaths, injury and damages to properties.

The Armed Forces Law expands this, citing the instances when the force could be used.

A section of the Armed Forces Act reads, “Force shall be used only when absolutely necessary to achieve an immediate aim; the decisions to open fire shall be made only on orders and under the control of the on-scene commander, unless there is time to obtain such order”, adding that fire can however be opened if the life of a soldier, any law-abiding member of the public and/or property of which it is the duty the force to protect is in grave danger then fire must be aimed at controlled, and indiscriminate firing is not permitted.”

With the evidence gathered, holding a Nigeria flag cannot stop the army from shooting protesters as such provision is not stated in the Nigerian constitution nor is it written as part of the Army rules.

Fact Check: How Authentic is this viral video of soldiers shooting at protesters at the Lekki Toll Gate?

CCTV was dismantled to cover the massacre of young peaceful, #EndSARS protesters by the military