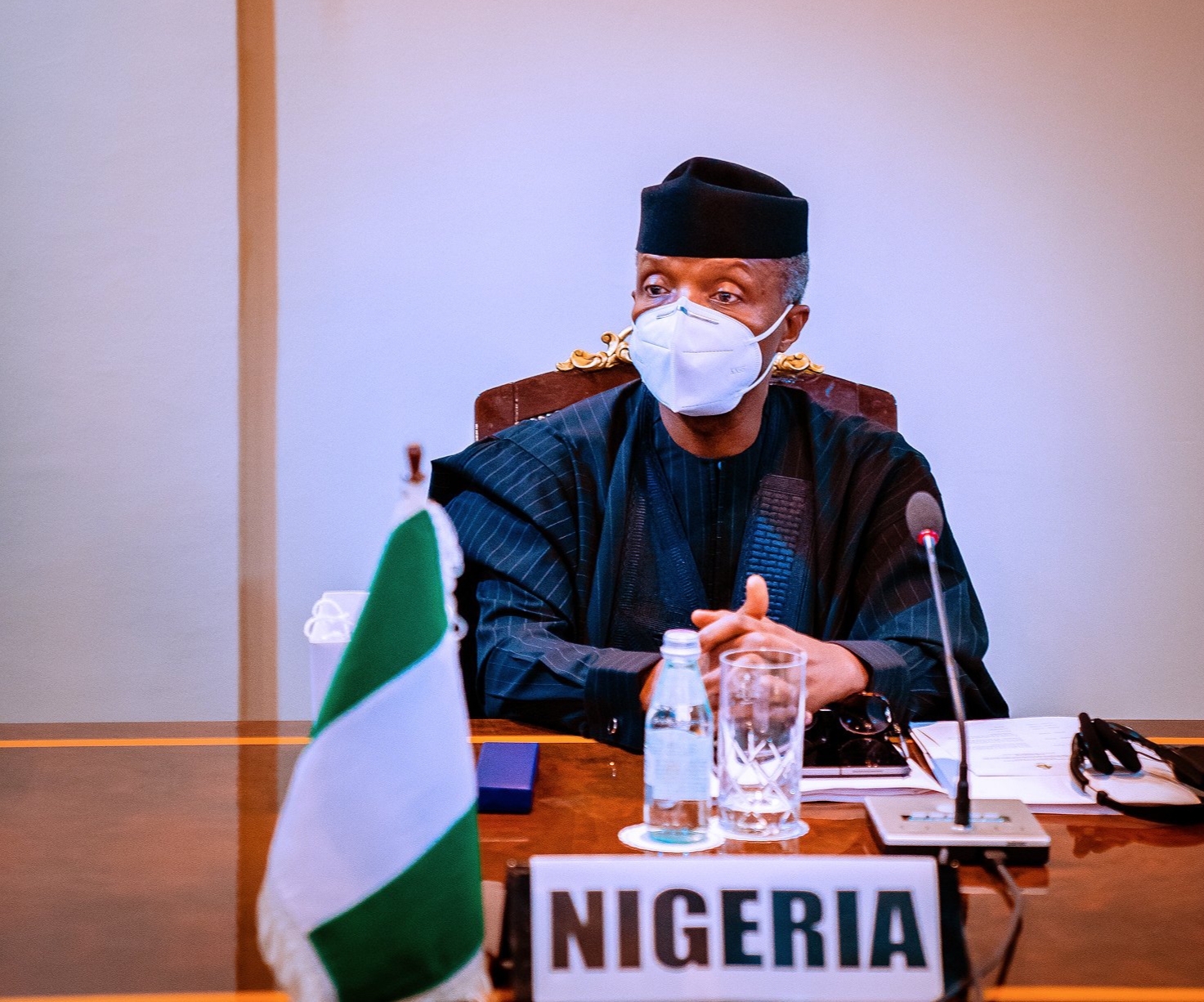 Nigeria’s Vice President, Yemi Osinbajo, says despite the seeming delay in resolving the concerns of Nigerian traders regarding some stiff business regulation imposed by Ghanaian authorities, the Federal Government will ensure that affected Nigerians get justice.

Osinbajo gave the assurance during a meeting with representatives of the Nigerian community in Ghana.

The meeting which took place at the official residence of the Nigerian High Commissioner to Ghana was focused on the challenges facing Nigerians living in the West African nation including the locking of hundreds of Nigerian owned shops.

Responding to the issues raised by leaders of the Nigerian community at the meeting, especially the maltreatment of Nigerians by Ghanaian authorities, Professor Osinbajo affirmed the commitment of the Federal Government to deal with the issues, assuring them of justice.

According to him, “I will certainly convey the depth of your grievances to the President. I am sure that he will be deeply disturbed to hear that despite the assurances that he had received, (from the Ghanaian government) there are still problems and complications, many of which have been discussed at the highest levels with assurances of resolutions given.”

But the Vice President explained that the delay in resolving these issues may be due to bureaucratic bottlenecks which is generally a drag on government activities.

“I look forward to getting the details and making sure that we are able to begin to resolve some of these issues as quickly as possible. But I think you must also recognize that generally speaking, governments tend to be very slow, processes are slow, bureaucracies are slow, but we will make sure that we do the very best we can to get you your rights so that at least you are dealt with justly.”

Referring to efforts made in the past and even recently to resolve the crisis, Osinbajo said, “I have followed closely developments here, and many of the incidents that you have described, I am already very familiar with. As a matter of fact, the President had asked that a review of all that had taken place to be done.”

“There have been direct communications between our President and President Akufo-Addo. Our President has spoken to him about this, he has made a formal complaint to him, and that conversation has been going on. What the Ghanaian government pledged to do, on three occasions, was that the shops will be reopened. In fact, I am a bit surprised that it has not taken place because my understanding was that, that was going to be done.

“So, I think what we need to do aggressively is to follow-up with the Ghanaian government and to see that these things are done.”

“I am sure you are familiar with the fact that there was a meeting between the Minister of Trade and Industry of Ghana and a team led by our own Minister of Industry, Trade, and Investments in Abuja which took place on the 3rd of September, while the Rt. Hon. Speaker of the House of Representatives, Femi Gbajabiamila was meeting with his counterpart here.

“Now, it is very evident from what you have said here that there is so much that had gone wrong over a long period of time and we really need to address these concerns in as detailed a manner as possible. And what I can say to you is that this is a matter that concerns the government very greatly…your welfare concerns us greatly.”

The Vice President, however, urged all affected traders through their associations and leaders to submit a more detailed letter containing the number of affected shops and other relevant information that would enable the Nigerian government follow-up effectively their Ghanaian authorities.

“It is important, we have a specific detail of the shops that need to be reopened so that we can check and say how many, I am aware of 160 or so, shops are affected. So, I think we should have a list with specifics so that even if we are told that something has been done, we can cross-check and see to it that it has actually taken place.”

Osinbajo then urged Nigerians living in Ghana to remain law-abiding and to embrace peaceful coexistence, while adding that both governments would resolve the differences.

“I think that is up to us now, to our two governments, and to those of you who live here and Ghanaians who live in Nigeria, to ensure that we are able to bring about peace and to live with each other. Governments have serious roles to protect the lives of citizens especially foreign citizens,” he hinted.

Earlier at the meeting, the First Vice President of the Nigerian Union of Traders Association, Ghana, NUTAG, Chief Kizito Obiorah, and a publisher of an Online medium, Destiny Austin Omon, took turns to present copies of their petitions to the Vice President before speaking about the numerous challenges faced by Nigerians in Ghana especially. They called for an urgent intervention by the Federal Government of Nigeria.

For Chief Obiorah, the situation is becoming unbearable as many Nigerian traders whose shops had been locked since November 2019 have now resorted to begging to take care of their families.

The representative of the traders appealed to the Nigerian government to prevail on their Ghanaian counterpart to reopen their shops to enable them sell off their goods and return home to Nigeria.

On his part, the representative of Nigerian students, Adebayo Ogunkoya, called for improved support for Nigerian students studying abroad and especially in Ghana, noting the peculiar situation in the West African country.

Other officials at the meeting included the Minister of State Foreign Affairs, Ambassador Zubairu Dada, the President of NUTAG, Chukwuemeka Nnaji, some executives of the body, among others.

The Feminist Coven and the Fight against Sexual Violence in Nigeria