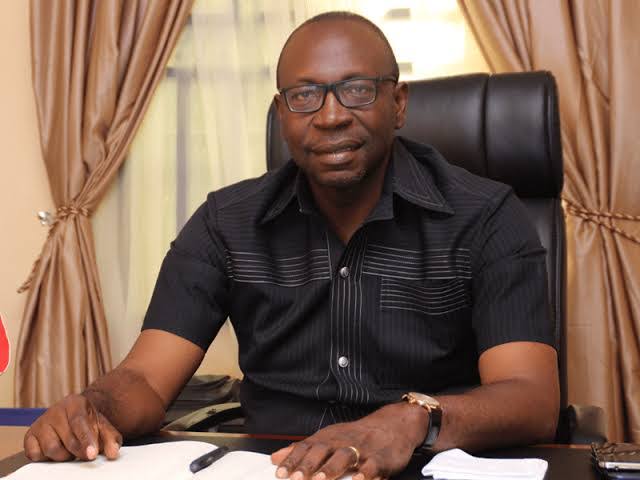 VERDICT: Misleading. The claim that the Edo state government receives 600million naira in security votes is misleading. Within limits, records for the past four years of federal allocation of security votes to Edo State show figures less than that.

In the recent Edo State governorship virtual debate organised by BBC Pidgin, Pastor Osagie Ize-Iyamu, the candidate of the All Progressives Congress (APC) in the coming election, claimed that the Edo State government receives 600 million naira in security votes monthly while talking about the state of security in Edo State.

About 24 minutes into the  debate, he said “if you calculate the money wey d governor de collect for security vote, it’s close to 600 million every month”.

Mr Ize-Iyamu made this same claim on twitter on August 27, 2020  and he reiterated it in another debate organised by The Morning Show of Arise News Channel, the broadcast arm of THISDAY.

The Edo State governorship election appears to be a race between the incumbent Governor, Godwin Obaseki of the People’s Democratic Party (PDP) and the candidate of the major opposition party All Progressives Congress (APC), Osagie Ize-Iyamu. The elections will be held on Saturday, 19th September 2020.

WHAT ARE SECURITY VOTES?

Security votes are monthly budgetary allocations provided to the 36 states in Nigeria by the federal government. These funds, which run into billions of naira, are provided for the sole purpose of financing security within the states. The percentage of allocation is dependent on the level of security in the state. For instance, states which suffer to a large degree pipeline vandalisms, violent kidnappings, and terrorism are likely to receive higher security votes.

The State governments are encouraged to apply their own discretion in disbursing these funds. According to Transparency International’s Matthew T. Page in a 2018 report titled, Camouflaged Cash: How ‘Security Votes’ Fuel Corruption in Nigeria these votes have not been widely accepted by citizens, as there is no accountability or transparency to the manner in which these funds are disbursed.

Another reason it is greatly criticized is that it is an initiative adopted from the era of military rule in Nigeria. Chief Robert Clark, a senior advocate of Nigeria and a critic of security vote had argued that there is no actual constitutional backing for security votes in the democratic era.

It was widely viewed as an avenue for corruption by past military rulers. In this defence and security report, Transparency International dates the inception of security votes as far back as the 1960s during the rule of General Yakubu Gowon. The lack of transparency and accountability by state governments with the rising levels of security in Nigeria currently proves the inefficiency of these allowances.

Transparency International is an independent, non-governmental, not-for-profit research agency working with over 100 countries to demand transparency in government and end corruption.

“The point I am trying to make is that security votes are in the budget. There is a supplementary budget where the money was increased”.

In search of budgetary verification for this claim, Dubawa reached out to BudgIT, a civic organization that applies technology to simplify budget and public data for public accessibility and participatory governance. An assessment of the Edo State budget for 2020 shows an allocation of 5 billion-naira (5,000,000,000) security votes under recurrent expenditure (personnel and overhead cost). When asked about the claim the Principal Lead/CEO of BudgIT, Gabriel Okeowo, said that Nigerian security votes are usually “shrouded in obscurity”.

Transparency International estimates that these secretive, unaccountable, cash expenditures total to over $670 million (N241.2 billion) annually. In their analysis of 29 state budgets, as 7 states could not provide any data, shows an average of $580 million (N208.8 billion) in total spending each year on security votes. The Transparency International Defense and State Security Report Annex B: State Security Vote Data show security vote allocation to states from 2015 to 2017 the MDA in charge of receiving and disbursing these funds in Edo State is the Office of the Governor. MDA stands for Ministry, Department and Agency.

Do all states use security votes?

According to Matthew T. Page, not all states use security votes. Since 2008, Lagos State has modified its approach to security funding by adopting a public-private Security Trust Fund (STF). This funding provides supplementary finance for security services. The Lagos State Security Trust Fund (LSSTF) is independently audited every year and operates more transparently according to the TI. Ogun, Osun, Kano, Oyo, Imo and Ekiti states have adopted this initiative and now claim to have set up similar STFs. On average, State Security Trust Funds are backed by legislation and managed by a board of trustees of government and private industry.

Ize-Iyamu’s claim that the Edo state government receives the sum of 600 million monthly is misleading. These allocations are often secret with no records to authenticate the claim. Yet, considering the data for the past four years, a summation of 600million naira is not factual.