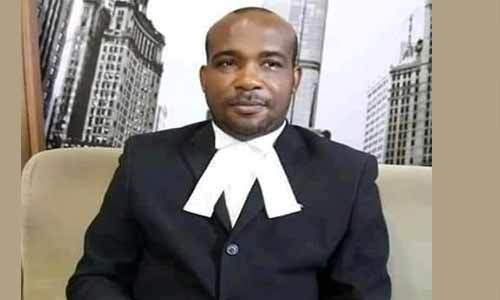 New details have emerged surrounding the continued incarceration of Emperor Gabriel Ogbonna, the lawyer detained by the Department of State Services (DSS) allegedly on the orders of Abia State governor, Okezie Ikpeazu.

Arrested on March 24, 2020 by the DSS on allegations of cybercrime and terrorism, Mr. Ogbonna was granted bail by the Federal High Court, Umuahia, but he was subsequently re-arrested by the Abia State DSS immediately after meeting his bil requirements.

NewswireNGR can for the first time reveal the circumstances that led up to Mr. Ogbonna’s arrest and detention.

Working with TruthIsNow.org, a discreet journalist outreach program, an undercover journalist in Abia State has revealed that he spoke to Mr. Ogbonna on camera about a story focusing on the Abia State government shortly before the lawyer was taken in.

Out of concern for his safety, he did not want to be identified and his story was put on ice, but thanks to TruthIsNow, NewswireNGR can now reveal the story that may have pitteded the Abia State government against Mr Ogbonna, who is an outspoken critic and regular human rights commentator in the state.

The video below exclusively made available to NewswireNGR through TruthIsNow, reveals that Ogbonna went on record to comment publicly about the Abia State government’s alleged failure to act on the Administration of Criminal Justice Act which it domesticated in December 2017.

The journalist’s undercover investigation shows that summary arrest and indefinite detention without trial are still allegedly rife in Abia State despite the provisions of this law because the state government has not availed the judiciary of the resources to carry out the duties stipulated in the law.

Specifically, the law states that the Abia State Chief Magistrate or a Magistrate designated by them must carry out a monthly inspection of detention facilities except prisons in Abia State to ascertain whether detainees are held in acceptable conditions and have not been held beyond the time stipulated for them to be brought to trial.

Ogbonna who spoke to the journalist on camera at his office in Abia revealed that he is not aware of any instance when the Abia State Chief Magistrate has ever carried out this duty or used any of their powers to defend the rights of detained people.

You can watch the full report including Ogbonna’s testimony below:

Giving his personal comments on the matter, the anonymous journalist said:

Mr Emperor Ogbonna is one of the two lawyers I interviewed in the cause of this report, but for over two months now the state authorities have held him behind bars over trumped allegations of cyber bullying and have refused to release him despite orders of the court to do so. On July 14, 2020, his pregnant wife gave birth to a baby boy in his absence and coincidentally, a rally was held at the Nigeria’s capital Abuja for his release.

Assault On Free Speech and Dissent

Ogbonna’s arrest and detention comes in the midst of a sustained push toward a crackdown on dissent across Nigeria.

Over the past 9 months, no fewer than 4 separate legislative and regulatory attempts have been made to stifle free speech in all areas of the Nigerian public space. The so-called ‘Hate Speech Bill’ and ‘Social Media Bill’ are still up for consideration at the National Assembly.

In April, NewswireNGR published a deep-dive into the proposed Control of Infectious Diseases Act, which also attempted to smuggle in criminalisation of dissent and broad, discretionary powers of speech interpretation. The recently signed 6th NBC Code is yet another example of this nationwide drift toward authoritarianism and anti-dissent.

At a press conference earlier today, Minister of Information Lai Mohammed spoke against journalists who were critical of the anti-free speech clauses in the code, which included a new N5 million fine for “hate speech.”

In his prepared comments, he accused them of being sponsored “hack witers” saying:

What I have observed in the reactions to the last amendment are interests who believe that their singular business interest is superior to the national interest. Therefore, they have resorted to all kinds of blackmail, using hack writers.

Emperor Ogbonna remains in detention to date despite calls for his immediate release from several local and international human rights organisations including Amnesty Nigeria.

Based in London, TruthIsNow.org is a safe and secure platform that enables African and international journalists or citizens who are concerned about their personal safety or reputation to push evidence or leaks that matter to the social good.

The platforms accepts these stories and leaks and then interfaces with journalists whose circumstances permit them to publish them on trusted platforms including NewswireNGR.

Whistleblowers can receive up to $1,000 USD for successful leaks and leaks are currently accepted from Nigeria, Ghana, Kenya, Tanzania and Uganda.

Not an all boys club anymore; meet Northern Nigeria’s only female Polo Player

Special Report: Tales of gloom as Nigerian farmers deal with the hard realities of Covid-19