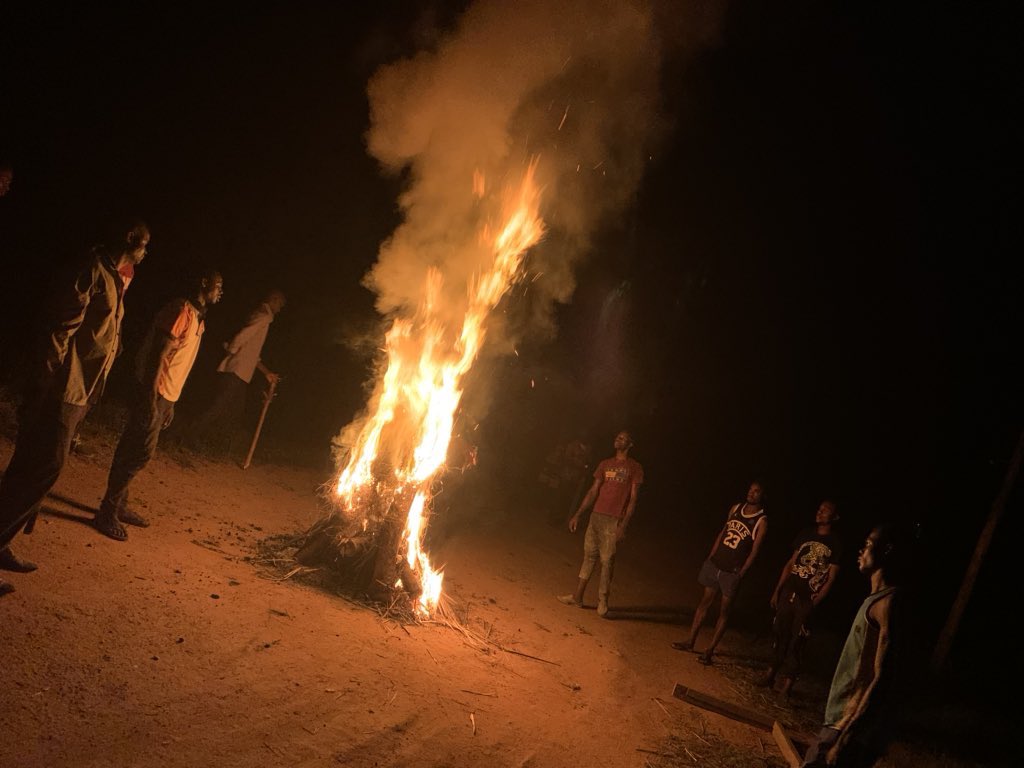 At exactly 9:00pm on Saturday, 11th of April, residents of Johnson street (name changed) heard the tinkling sound of the emergency bell.

It wasn’t a call to discuss the Covid-19 pandemic that kept everyone at home. It was a distress call to inform everyone that the notorious one million boys gang have been robbing the whole of Agege, Ogba, Pero and Iju Ishaga and they may arrive shortly.

From that night, the males of Johnson street formed a night patrol team to daily guard the street and repel any incoming attack.

As reports later surfaced on social media,  residents of Johnson street and Agege were not the only ones taking charge of their security. Different pictures and videos shared on the internet showed scores of men brandishing cutlasses and other form of weapons  to defend themselves against the notorious gang.

I was in one of these crowds, gazing round and wondering how these divisive Lagosians suddenly morphed into a united patrol unit.  A popular retort used to highlight Nigeria’s challenges is that we are too divided along tribal, religious and class wars. But here we are, with different classes, different ethnicity and different religion coming together to fight.

Did they lie to us that Nigerians cannot be united? Probably.

For years, discussions about the failures of Nigeria have largely been a blame game. Depending on your observations, you would likely believe that

1. Nigeria is a nation with helpless followers and bad leaders

2. Or Nigeria has an even distribution of bad followership and inept leadership

While there are facts to support whichever side of the divide you are, I posit that Nigeria’s challenge is a unique systemic one.

A system is a set of things working together as parts of a mechanism. Every country in the world operates as a system, with its citizens acting as the components.

The progressive countries understand that individual components (citizens) within the system are vulnerable, so they create mechanisms that mask their weaknesses and dilute their biases.

They understand that human instinct is built on survival and people will act based on the reality of their survival. If survival amenities becomes scarce, humans will become selfish and break the scale of morality to survive. So they create enabling systems that aids survival and maintains order.

They understand that there is a direct correlation between hunger and crime, so they create enabling systems for financial independence.

They make access to food very basic that almost all their citizens can afford 3 square mealsdaily.  They make it easy to access quality healthcare; they improve access to education so their citizens can learn beneficial skills, improve the quality of the life and make a meaningful impact in the world.  They basically reduce pitiable excuses to commit crime.

Whereas in Nigeria, the poverty capital of the world, we would rather point blaming fingers than reflect on why crime rates keep increasing.

We get surprised that increasing prevalence of poverty means more people do fraud.

We still marvel when we hear that Boko Haram and other crime units recruit people for peanuts and promise of heavenly virgins.

We still blame that poor artisan that collects 10 different projects and does a mediocre job because of his rising debt profile. We still blame people who vote for politicians because of some cups of garri.

We fail to see that the prevalence of this morally decadence, is an offshoot of poverty. We forget that the more unhappy people are (Nigeria ranks 85th in world happy index), the more likely they are to hurt their next neighbour.

Not everyone commits crime because they are poor but, watching one’s children cry of hunger, watching a loved one suffer health crisis and not being able to get healthcare can almost push the most moral person into committing a crime. And as Marcus Aurelius puts it, “Poverty is the mother of crime”.

So if we want a sharp drop in the rate at which Nigerians commit crimes in a nation where more than 60 percentage of it’s citizens live on less than $1 a day, we should find a way to reduce the poverty level.

Another systemic problem we have in Nigeria is the inability to enforce the law. Nigeria has a lot of laws and law enforcement agencies that should ordinarily solve our challenges. There is Economic and Financial Crimes Commission (EFCC), National Orientation Agency (NOA), National Agency for Food and Drug Administration and Control (NAFDAC), Nigeria Police Force (NPF), ICPC and many others, but for some factors and loopholes in the judicial system, it means some people can break the law and rub it on other people’s faces.

Who stops a politician from stealing money for his great grandchildren?
What stops that power drunk Police official from shooting his gun at the slightest confrontation?

Securing systems:
One of the reasons people say Nigerians are enablers of a poorly managed country is our tendency to break simple but beneficial laws.

For example, most people would rather cross an express road than use the pedestrian bridge.

While this assertion holds some truth, the study of human behaviour shows it is absolutely normal.  Humans wherever they may be will always be complex to manage.

For example, when some Lagosians flouted the lockdown rules and went jogging, many complained and thought it was an all Nigerian thing until we saw that people in Italy, USA, and other countries did the same thing and even worse than that.

The difference however is, the government in other countries would not let their citizens indiscipline stop them from protecting them. They would rather think – these people don’t take pedestrian bridges – How do we enforce them to use it?

Taking a cue from the English Premier League.

Before the English Football Association introduced the Video Assistance Referee (VAR) in 2018, it was common practice to see players dive from the smallest of contacts in the opponent box 18. They sometimes even initiate these contacts so the referee can reward them with a cheap penalty.

What did the EPL football association do? They introduced VAR to curtail this bad habit. And now, when an attacker fakes a fall in the opponents penalty box, he not only risks getting a yellow card as a punishment, he also risks being shamed for diving ridiculously.

The night patrol has continued to disprove the facts that Nigerians are core tribalists or wicked people. It proves that when you give Nigerians a true reason to unite, Nigerians will blur out divisive lines, draw strength from each other and unite to fight the common enemy.

How about we create a system that makes poverty and lawlessness that common enemy?