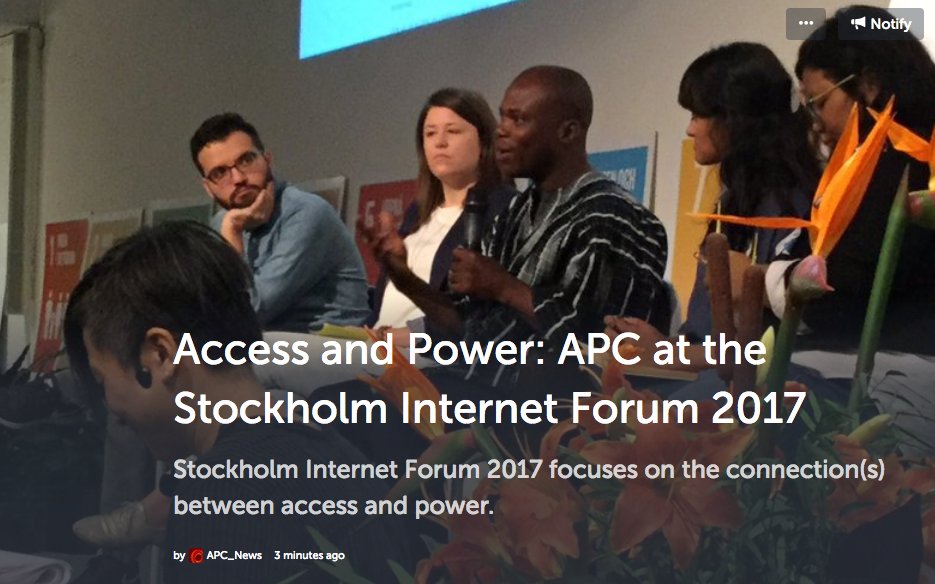 We are in the 21st century and it is shocking that activists, advocates and development agencies still continue to agitate for citizens access to the internet – internet accessibility has undoubtedly become a fundamental human right – but some nations are not allowing the freedom that comes with internet access – there’s been a large-scale government-authorized crackdown or total shutdown of the internet especially in developing nations.

To best describe the Internet in formal terms, it is a global system of interconnected computer networks that use the Internet protocol suite (TCP/IP.) Despite the increasing billions of people accessing the Internet there remain pockets of the world that do not have access; attempt to restrict or control the content that users have access to .Why are developing countries shutting down the Internet? Why the legislation to crackdown users? Why has the Internet become more of a threat?

Participants from over 400 countries gathered in Stockholm to find answers to the foregoing concerns – with the theme, “leaving no one offline” at the just concluded Stockholm Internet Forum (SIF) – from governments to corporate agencies and civil society actors, the argument moved from legislation to economic liberation and users privacy.

To get closure, I decided to enquire from participants from seven countries – (used that number for my sample size) on how they have fared in accessing the Internet, from legislation to affordability and crackdowns, their responses gives a sense of what is obtained in many under-developed nations.

1. Cameroon
The Cameroonian government recently suspended Internet services for Anglophone areas of the country, (Southwest and Northwest province) after a series of protests that resulted in violence and the arrest of community leaders [from what period to what period]. How many deaths during protests?

“The cost of exposing the state abuse and the state excesses has fallen below the price of data”, says 38-year old Kathleen Ndongmo of the Anghore Group [a risk analysis firm?]. “In any gradation of citizen activism, taking a picture or video is the lowest risk form of engagement – a bullet cost more today than any dissenter”.

Despite being the leader of the country for almost 34 years, President Paul Biya is also to stand for the 2018 presidential election in Cameroon – a new seven-year term for the head of state is also linked to the severe internet crackdown.

2. Mozambique
Mozambique, a nation of 26 million people, has a barely sufficient 6% Internet penetration nationwide. 32-year old,Borges Nhamire, with the centre de Integridade Publica says the poor access to Internet is linked to government stringent regulations. “They (government) are not allowing for a free market”, he alluded. “During the 2011 demonstrations against the state of the economy, government shutdown access to internet and all forms of communications.”

Mr Borges says to ensure the crackdown is absolute, much after the restoration of Internet, “the government embarked on an enlightenment campaign, deceiving the population that WhatsApp conversations are monitored – that move reduced the participation of most Mozambicans from civil society activities that may be termed anti-government”.

WhatsApp’s end-to-end encryption ensures only you and the person you’re communicating with can read what is sent, and nobody in between, not even WhatsApp- messages are secured with a lock, and only the recipient and users have the special key needed to unlock and read messages – but a government manages to deceive its people in a bid to stifle dissent.

3. Zimbabwe
Another country facing series of crackdowns is Zimbabwe and with elections ahead, speculations are rife. The government introduced a cybercrime and computer crimes bill with unclear definitions “so you could tweet something and they can determine whether you’re a cyber terrorists – and the essence is to curb protests”, says 32 – year – old Munya Bloggo of Magamba Network, a Zimbabwean organization.

Munya said in January 2017, “the government in collaboration with the private sector, allowed a 500% increase in data so it becomes out of reach of the ordinary people which then led to “datamustfall” hashtag.

4. Myanmar
In far away Myanmar with Aung San Suu Kyi as incumbent State Counsellor and Leader of the National League for Democracy. The popular Section 66(d), seems to be the newest threat to freedom of expression and a tool surprisingly, for the former activist. Persistent repression of criticism through section 66(d) of the Telecommunications Law has led lawyers, politicians and activists to suggest that conditions for free speech have continued to deteriorate under the National League for Democracy-led government, despite expectations that the new leadership would usher in an era of freedom.

The government is under mounting pressure from the public and from rights groups to amend its criminal defamation laws after a spate of cases against journalists and bloggers has raised questions about the administration’s commitment to protecting free speech. “Our member posted a satire on his facebook wall and he got six months in jail” Activist Zar Chi Oo tells me. Activists Chi Oo is a member with PEN Myanmar, a pressure group advocating for the law to be abolished says it puts every social media user at risk of arrests or detention. “A supporter of a public figure can just see any post and sue the user and said social media user is immediately detained”.

5. Tanzania
The Tanzanian government in 2015 also got smart enough to develop a cybercrime bill. The document shrouded in secrecy was “taken to the parliament– citizens were given only 24 hours to review the document with most parliamentarians lacking knowledge of most of its content”, famous activist with the Change Tanzania movement, Maria Sarungi-Tsehai says. “What they were really doing was criminalizing gossip”, she continued – “and that has led to series of arrests of crackdowns as we’ve seen over the last year”.

6. Pakistan
While other nations give different reasons for the subtle crackdown or total shutdown of the Internet, the Pakistani government blames its intermittent act of shutdowns or blocking platforms like YouTube and Facebook to the prevention of terrorist activities.

Authorities claim users posting blasphemous contents have a tendency of leading extremists/terrorists attacks – the government only recently, also threatened facebook to reveal identity of users. But 24 – year- old Rafia Shaih, a freelance Journalist says “ If you’re shutting down the internet for national security, what is being done is simply attacking the basic human rights of communication”, she argues.

7. Kenya
Judith Omigar, working with Juakali, an online platform linking young people seeking for jobs in the formal sector says, “The Kenyan government is likely to shutdown the internet ahead of the August general elections”. She said there has been series of arrests of bloggers posting contents against powerful persons in the country and the build up to the election season will likely see to more crackdowns of Internet users.

While the conversation about a free, open and secure Internet that promotes human rights and development worldwide continues. For governments especially in the developed nations, I’d like to share a 2009 report by the World Bank, which clearly states that access to broadband boosts economic growth in all countries, but most especially in developing ones. The study also showed that in developing countries, for every ten-percentage points of broadband penetration, their economies grew by 1.38 per cent -the report, conducted in 120 countries between 1980 and 2006, showed that developed countries’ economies grew by 1.21 per cent.
———–
***
Mercy Abang is a Freelance Journalist – Media Fixer with Sunday Times of London, BBC, Aljazeera and a former Stringer with the Associated Press – She tweets at @abangmercy..