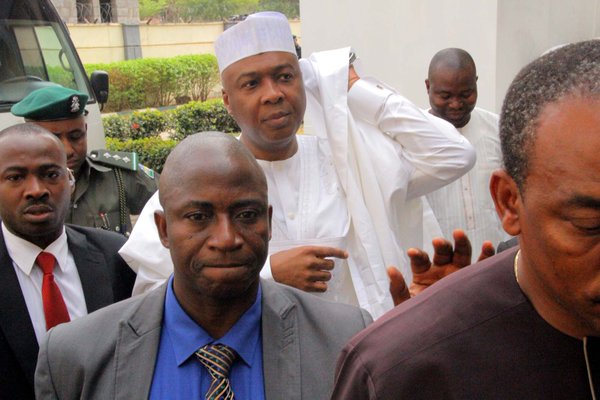 Senate President Bukola Saraki has described the alleged case of forgery of the standing order of the senate as vendetta, vowing to “explore all legal options necessary to ward off this fresh distraction”.

In a statement by Yusuph Olaniyonu, his special adviser on media and publicity, Saraki said he was not a part of the leadership of the seventh senate that made the rules in question, and that prior to his election as president, he was “merely a senator-elect like all his colleagues”, and therefore was not in a position to influence the rules that were to be used in the conduct of the election.

“The police in their investigation were conscious that the incumbent senate president was not in office prior to June 9, 2015 and that was why in their letters inviting some individuals for their investigation, they only mentioned officers of the seventh senate,” the statement read.

“The last of the letters was written to the clerk of the national assembly on June 7, 2016 and he was not among those invited.
“Those who decided to smuggle the name of the senate president into the charge sheet after the fact knew perfectly well that only the leadership of the seventh senate were invited for investigation. But they needed to implicate him in keeping with their declared vow to ensure that even if their current efforts to nail him through the Code of Conduct Tribunal (CCT) fails, they would find other ways to carry out their vendetta.”
Saraki described the case as an abuse of the constitution, saying a war has been declared on “our hard-won democracy”.

“This so-called forgery case is another wanton abuse of the judicial process and making a mockery of the institution of justice. As the senate earlier stated, the sponsors of this plot are not only gunning for Dr Saraki, what they have just launched with this latest antics is a grand onslaught on the foremost institution of our democracy,” the statement read.

“The only institutional difference between dictatorship and democracy is the presence of the legislature. Therefore, by seeking to cripple the national assembly, they have declared a war on our hard-won democracy and aimed for the very jugular of our freedom.

“Let us restate the fact that the senators who initiated the police investigation in the first place had raised the same matter on the floor and were overwhelmingly overruled. They also filed a civil suit and were told by the court that neither the judiciary nor the executive can interfere in the internal affairs of the legislative arm.

“These needless distractions will do nobody any good. In fact, it will not help in delivering on the promise of bringing positive change to the lives of our people who voted for the All Progressives Congress (APC) in the last elections.

“The senate president does not see what value this current attempt to shut down the senate by dragging its presiding officers before a court for a phantom allegation of forgery will add to the attempts to solve the problems confronting the nation.”