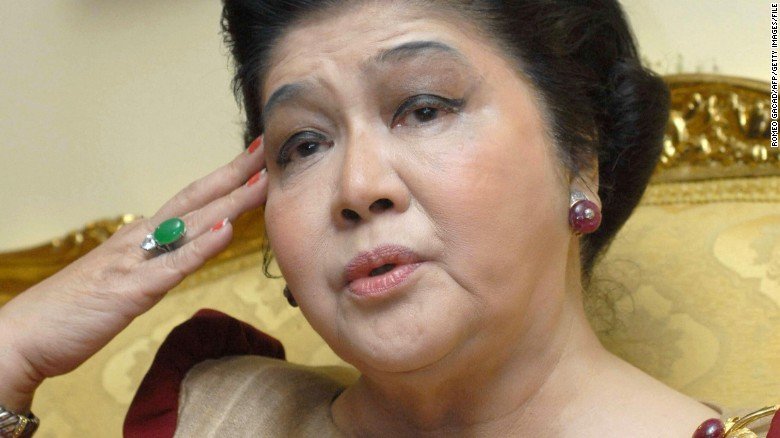 The Philippines government says it will auction the 21.27 million dollars worth of jewellery seized from former first lady, Imelda Marcos.

The Presidential Commission on Good Government (PCGG) said on Monday in Manila that the sale of the jewellery was approved last week by an inter-agency privatisation council.

PCGG Chairman, Richard Amurao, expressed the hope that Filipinos would finally benefit from the proceeds of the collection.

He said the jewellery confiscated from the Marcoses remains a singular manifestation of the misguided priorities of the Marcos presidency during his reign.

Mr. Amurao said no date has been set for the international auction, but the auction houses, Christie’s and Sotheby’s appraised three sets of jewellery seized from Imelda Marcos in November.

“The value of all three collections now amounts to a conservative estimate of at least 21.27 million dollars (1 billion pesos).

He said the items include a rare 25-carat pink diamond, a range of necklaces, brooches and crowns made from Burmese rubies, other diamonds from India and South Africa, and emeralds from Colombia in various sizes.

Mr. Amurao said some pieces were from renowned international jewellery makers such as Bulgari, Van Cleef and Arpels, and Bucellatti, as well as wristwatches from Patek Philippe, Rolex and Cartier.

He said the PCGG planned to put on show part of the jewellery collection before its international auction to remind the Filipino people of the excesses of the Marcos dictatorship.

Ferdinand Marcos ruled for 20 years until he and his family were forced into exile by a four-day mass uprising in February 1986.

Members of his family still face dozens of corruption charges for allegedly stealing billions of dollars from the country’s coffers.

The family has made a comeback in politics with Imelda Marcos holding a seat in Congress.

Her son is a senator and her eldest daughter is a provincial governor.

Senator Ferdinand Marcos Junior is running for vice president in national elections in May.

The commission was formed after the ouster of former dictator Ferdinand Marcos to recover assets allegedly stolen by his family and associates.