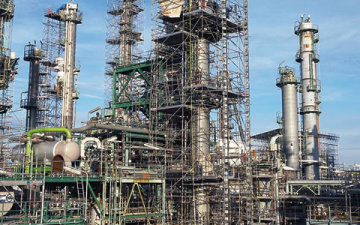 The Nigerian National Petroleum Corporation (NNPC) wednesday raised hopes that the lingering queues at fuel stations across the country would subside with the production of 3.2 million litres of petrol daily by the Kaduna Refining and Petrochemical Company (KRPC), 48 hours before the Christmas celebrations.

NNPC said in a statement from its Group General Manager Public Affairs, Ohi Alegbe in Abuja, that the refinery started production over the weekend with an initial petrol yield of about 1.5 million litres a day.

It stated that the production volume has now been ramped up to a daily yield of 3.2 million litres.

This development notwithstanding did not lead to a reduction of the long queues even at the corporation’s mega filling stations within and on the outskirt of the Federal Capital Territory (FCT).

Even with the December 22 record of daily petrol truck-out of 914 trucks bearing 64.04 million litres, which the Petroleum Products Pricing Regulatory Agency (PPPRA) provided, and from which Abuja got 132 trucks, THISDAY’s checks showed that Abuja residents still went harrowing times to get fuel in their tanks.

The situation was further exacerbated by the availability of fuel in just a few of the service stations operated by major marketers. Those owned by the independents remained shut due to lack of fuel, with some turning into the operational base of black market profiteers who sold petrol at N250 a litre.

NNPC, however, said in the statement that supply from the volume produced by the Kaduna refinery would significantly advance its efforts to sustain supply and clear the scarcity through the recent special intervention initiated by Minister of State for Petroleum Resources, Dr. Ibe Kachikwu.

“The injection of this volume into the system will significantly impact ongoing special intervention efforts designed to bring relief to motorists across the country,” said NNPC in the statement.

It noted that less than 48 hours after Kachikwu ordered its staff to intervene in the monitoring of fuel distribution and retail at filling stations across the country, the initiative has started yielding positive results in Abuja and its environs.

According to NNPC, the situation at most filling stations visited in Abuja remained calm and orderly, as it helped to fast-track the process of dispensing fuel to motorists in the city.

It quoted its Group Executive Director, Commercial and Investment, Dr. Babatunde Adeniran as stating that after a tour of some stations, “the exercise has recorded some success”.

Adeniran said: “Our staff are putting in all their best to ensure that orderliness is restored in most of the filling stations. They are also there to ensure that nobody creates a situation that will hamper the discharge of products to ordinary Nigerians. So far, they are doing well in this regard.”

He also explained in the statement that the exercise was a hands-on approach designed to ensure that Nigerians do not suffer unnecessarily at the hands of unscrupulous marketers, adding that the situation would be improved upon.

He also called on security agencies to complement the efforts of NNPC at the filling stations, saying: “At one of the filling stations in Asokoro today, the police came to assist us to clear out some motorists trying to jump the queue. That is most commendable.”