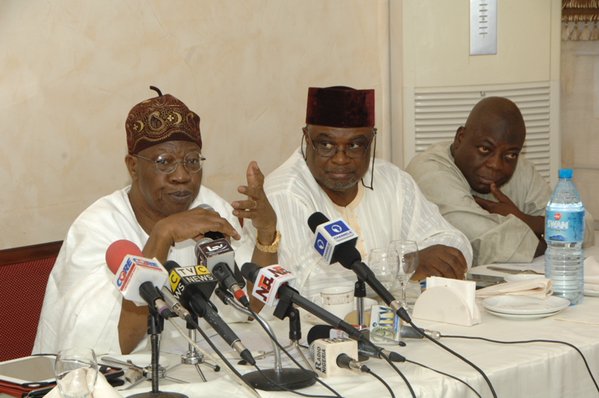 The Minister of Information and Culture, Alhaji Lai Mohammed, has urged journalists how to behave with the news when Nigeria is at war, saying that Nigeria army has met the deadline on Boko Haram.

Lai Mohammed was speaking in Lagos on Wednesday, December 23, during the interactive session with newsmen.

He said: “Yes, you must remain professional at all times, and we are not asking you to do anything less, but you must also act in the national interest always.

The minister told the journalists that the army has almost met the Dec. 31 deadline given by President Muhammadu Buhari to defeat Boko Haram, saying what he saw during his recent trip to the theatre of war in Borno state and the briefings he received from the army top persuaded him of the successes recorded by the military.

‘‘They (military) have so degraded the capability of Boko Haram that the terrorists can no longer carry out any spectacular attacks. Remember, gentlemen, that at the height of the war, Boko Haram controlled 20 of the 27 local governments in Borno.

”I can hear you saying to yourself: But the terrorists are still carrying out suicide bombings and killing people. My response to that is that such is the nature of insurgency anywhere. Unlike a war between two armies, an insurgency never ends with an armistice. Even in countries like Colombia where insurgency was supposed to have ended decades ago, attacks still happen,” Lai Mohammed said.

He cautioned that as the deadline comes, Boko Haram and ISIS have started their propaganda, looking for discredit of the Nigerian Armed Forces to give the impression that they are still winning.

The minister denied a report that was widely published in the newspapers a few days ago, defining terrorists as dispersed and almost defeated.

“The insurgents are hungry, they are sick and they are desperate and will clutch at any straw,” he said.

“Don’t let us prop them up with our reports.”

He supposed that in the days ahead, the insurgents will release propaganda videos via their usual channels, cautioning that such publicity materials must not be given any play because it is only a hoax.

Lai Mohammed further added: ”To fill that gap, we have commenced a national security campaign to raise awareness among Nigerians about the war, about the sacrifice of our troops that has seen the terrorists largely defeated and about how to finally stamp out the remnant of the war, which is suicide bombing.

”As I speak, jingles are being played on national radio and television as part of this campaign. Also, in order to keep the media better informed about the war, so that they can also better inform Nigerians, we will soon inaugurate an ad hoc committee comprising media representatives as well as representatives of the military and intelligence agencies. This committee will meet from time to time for background briefings that will give the media a better perspective of the war.”

Kaduna Refinery According To The NNPC Is Currently Producing 3.2million Litres Of Petrol Daily