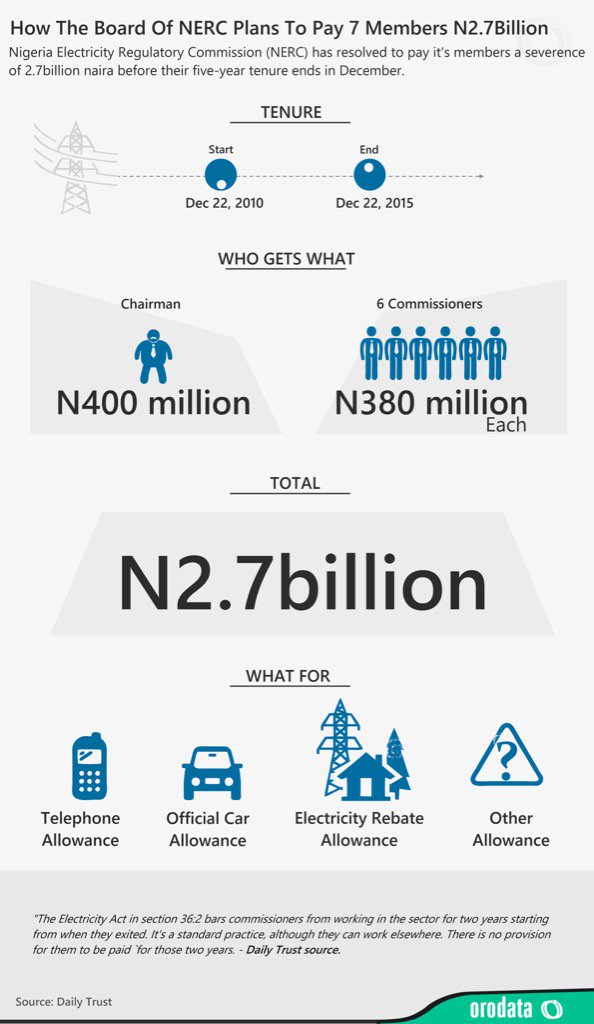 The Nigerian Electricity Regulatory Commission (NERC) on Tuesday denied that it has appropriated about N2.7 billion as retirement benefits to its Commissioners who are due to retire from its service in December.

It said in a statement that contrary to a media report that it put aside such sums to settle extant benefits that should accrue to the retiring commissioners, it has just about N2 billion set aside in a severance scheme portfolio for every official that would leave the commission and not just the seven commissioners whose tenure ends in December.

It however said that following the steps of its pioneer commissioners, it has an approved compensation for the retiring commissioners, NERC did not specify the amount.

Clarifying why it would give two years salary compensation to the commissioners after leaving office, NERC said that the Electric Power Sector Reform Act (EPSRA) 2005 barred the seven commissioners from engaging in any service, consultancy or appointments in the power industry for some time, adding that the case was applicable to other officials in public power agencies in the country.

“The former commissioners rightly provided for compensation for loss of income for two years for commissioners of NERC. When the federal government settled with them out of court, the president authorised the payment of the two years loss of revenue compensation,” NERC said in the statement, thus referring to the exit process of its pioneer commissioners.

As for the severance scheme, it said it was established in 2006 to cater for retiring staff in line with the Pension Act.

“The pioneer commissioners funded it with N500 million which the present commissioners increased it to N2 billion,” it said, adding that there is a board of trustees that manages the scheme and that it has only N2 billion.

The statement further said that no commissioner has been paid from the fund except 11 staff who have either exited, retired or are now deceased.

Despite Being Granted Bail, Dasuki Invited For Interrogation By Security Agents