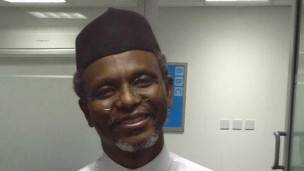 Though he’s widely reported to be the leader of the President Muhammadu Buhari’s “Cabal” and also called the Prime Minister of this administration.

Sahara reporters is reporting that a source at the Presidency has confirmed that Governor Nasir El-Rufai of Kaduna State was sidelined in the selection of Zainab Shamsuna Ahmed, the ministerial nominee from his state. Mrs. Ahmed is the current executive secretary of the Nigeria Extractive Industries Transparency Initiative (NEITI), a position she has held since the administration of former President Goodluck Jonathan.

According the online platform’s source at the Presidency, Abba Kyari, President Muhammadu Buhari’s Chief of Staff, unilaterally picked Mrs. Ahmed as the ministerial nominee from Kaduna State, bypassing such committed members of the ruling All Progressives Congress (APC) as Hakeem Baba-Ahmed, a retired federal permanent secretary, Umaru Dembo, a former minister, Isa Ashiru, a former member of the House of Representatives, and Ahmed Tijjani Ramalan, a businessman and leader of the state’s APC Caucus. “Power brokers around Mr. President convinced him to accept Mrs. Ahmed as the nominee for minister, sidelining Governor El-Rufai. According to our source, the choice of Mrs. Ahmed is likely to create disaffection among APC members who feel they worked for the party’s success in the March and April 2015 polls.

“The governor refused to interfere with the president’s ministerial nomination, thinking the President would use his discretion to choose from [among] Kaduna State’s APC chieftains who worked assiduously for the party. Then Governor El-Rufai was caught napping by Kyari’s choice of Mrs. Ahmed,” our source said. He stated that Mr. El-Rufai felt upset by the slight, adding that the governor had hoped that President Buhari would make a choice that would have created harmony within the Kaduna State chapter of the APC. “I expect Governor El-Rufai to make his position known to President Buhari,” the source stated. The choice of Mrs. Ahmed, a relative of Governor El-Rufai, has reportedly triggered some friction in the APC. SaharaReporters learned that the nominee is the daughter of Governor El-Rufai’s cousin, Yahaya Hamza. A retired permanent secretary in charge of the Federal Ministry of Education, Mr. Hamza died recently.

The nominee’s husband was a close ally of former Vice President Namadi Sambo, the source added. “Many APC chieftains see her [Mrs. Ahmed] as a member of the Peoples Democratic Party (PDP) and argue that she contributed in no way to the success of APC in the state,”.

For Bukola Saraki, The Nigerian Senate Will Do Anything, Even If It Requires Halting National Assignments