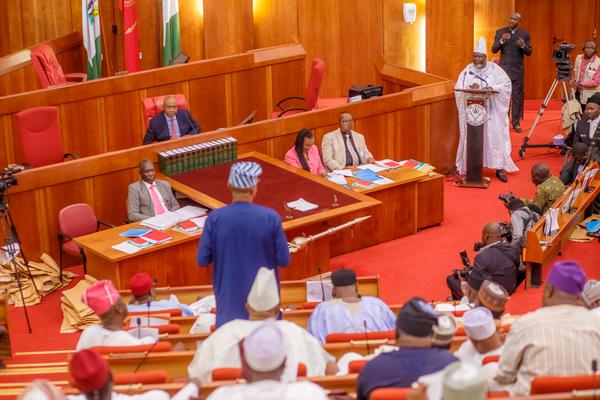 The Nigerian Senate yesterday decided to postpone the entire exercise of screening Ministerial appointees for President, as well as its plenary session’s all in a bid to play politics ..

Although no reason was given for the postponement, sources said it was as a result of the resumption of Senate President Bukola Saraki’s trial at the Code of Conduct Tribunal (CCT) today.

According to the acting Clerk of the Senate, Nelson Ayewoh, plenary will resume Thursday as Saraki appears before the Tribunal, Today, Wednesday to answer to alleged falsification of assets declared..

With the postponement of plenary and ministerial screening, Deputy Senate President Ike Ekweremadu, who under normal circumstances should have presided today, has also been prevented from doing so.

It is believed that the decision not to allow Ekweremadu to preside since he became Saraki’s deputy is a fallout of the controversy which trailed his emergence as Saraki’s deputy from the Peoples Democratic Party (PDP), as well as the anger it caused among members of the All Progressives Congress (APC).

A senator, who preferred not to be named, also explained that the reason for keeping Ekweremadu out in the cold, albeit temporarily, was a strategic one in order to prevent him from presiding over the Senate today when the screening of the former Rivers State Governor Chibuike Amaechi, should have come up.

He said since the PDP caucus of the Senate yesterday unanimously resolved to oppose Amaechi’s screening and confirmation, allowing Ekweremadu to preside today would amount to “leading a lamb, in this case Amaechi, to the slaughter”, as the PDP senators would have their way by not confirming his nomination.

Saraki is facing a 13-count charge for false declaration of assets preferred against him by the Code of Conduction Bureau (CCB).
His trial remains on course, as both the Federal High Court and Federal Court of Appeal deferred adjudication on the suits filed by Saraki challenging the jurisdiction of CCT on the matter.

The Senate president had through his counsel prayed the Court of Appeal for an order halting his trial by the tribunal pending the hearing and determination of his motion on notice before the appellate court.

But the appellate court, against expectations on Monday, postponed ruling on the case indefinitely.

The Dalandi Umar-led tribunal, in which Saraki was arraigned on September 22, fixed continuation of his trial for October 21, 22 and 23 for the federal government to prove the charges brought against him.

But Saraki on the day pleaded not guilty to the 13-count charge, maintaining that he was being prosecuted at the tribunal because he was the Senate President.

He also faulted the Code of Conduct Bureau (CCB) over its failure to first invite him to draw his attention to the discrepancies, if any, to his asset declaration forms for clarification as demanded by law.
However, concerns are mounting over the Court of Appeal’s unexplained decision to defer the ruling on Saraki’s suit indefinitely.
Another senator, who spoke on the issue, warned that the judges of the Court of Appeal were essentially dragging the judiciary into the political fray, adding that it was a throwback to the impunity that prevailed in the PDP era.

The senator, who is also a lawyer, pointed out that it was worrisome that the Court of Appeal had set a date for ruling on Saraki’s case challenging the jurisdiction of the CCT, “yet it postponed ruling without an explanation”.

“It shows that there were external factors that informed the judges’ decision to postpone indefinitely and this is a dent on the so-called war against corruption and the change mantra of the Muhammadu Buhari administration and the All Progressives Congress (APC),” he added.