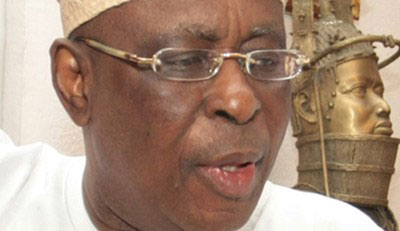 Former governor of Ogun State, Aremo Olusegun Osoba, has condemned former President Olusegun Obasanjo’s position in his book, My Watch: Political and Public affairs, that there had never been any Yoruba leader, saying “He (Obasanjo) wants to distort the history of the Yoruba.”

Obasanjo made the assertion in chapter 31 of the book, where he explained issues centred on Nigeria and Yoruba, arguing that there was no individual as Yoruba leader before and now.

Osoba, in an interview in Lagos, lamented that the declaration by the former President, who was present at the event when late Chief Obafemi Awolowo was ‘unanimously’ elected as the ‘Yoruba Leader,’ on August 12th, 1966, is worrisome.

According to him, “I disagree with the former President, on whatever claims he made that Awolowo was hand-picked by some of his supporters. In fact, the day he was elected as Yoruba leader was two weeks after Awolowo was released from prison by the military.
“As the garrison commander in Ibadan at the time, Obasanjo was an active member of General Adeyinka Adebayo’s erstwhile cabinet. I do not think that Obasanjo would have forgotten so soon the sequence of events that threw up Awolowo as Yoruba leader.

“I was present at the forum where Late Chief Awolowo was unanimously elected the Yoruba leader. And the election involved all stakeholders, including political, cultural and intellectuals in Yoruba land. Some who did not belong to Awolowo’s political camp also endorsed him,” Osoba added.

Osoba however said that Yorubas cannot have a single leader under current political dispensation. “What we can have at the moment is ‘cultural’ leader not an overall leader. By our level of education, exposure and independent mindedness we like to express our views.”

“Even in family meetings, the Olori Ebi (head of the family), is challenged on issues affecting the family. So, each time the interest of Yoruba is threatened, we all gather under the leadership of an individual to solve the problem,” he added.