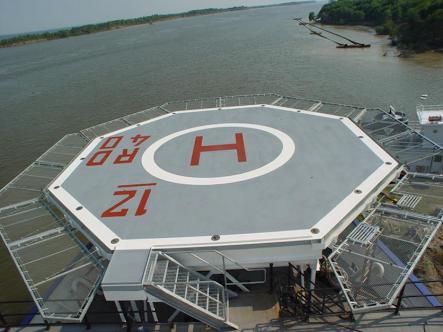 Following the news that the Federal Government of Nigeria which currently is facing an economic crisis is building a helipad in Daura, Katsina State, in order to ensure a direct flight for President Muhammadu Buhari whenever he visits his country home.

Toby wrote…
If this is true, then let it be on record that the first major infrastructure that Buhari’s government bequeaths Nigeria under this austere time of empty treasury is a gigantic helipad in his arid village for his personal use.

In 4 years what happens to this helipad? Just wondering.

Jon West wrote….
The leopard will never change its spots. The modus operandi of the Fulani elite in search of power and conquest is to first ,accuse the incumbent rulers of corruption, and set them against the people. In the ensuing confusion, they like lions on a hunt, then seize power. After they take over, they unleash the worst kind of corruption and ensure that there is no rebellion through strong arm processes. President Jonathan did not even build an airport in Bayelsa and used the naval helicopter pad very far from Otuoke to get home. Now the “ascetic” anti -kwaroption fighter is already living a profligate existence . But then Jon West warned the indolent trolls on social media that they have invited the camel into the Nigerian tent. Let the people who brought this curse on the Nigerian people hide their faces in shame , if they have any conscience.

Powell Tallen wrote………
Here we go again! CHANGE has indeed come! What a wast when ordinary people are not paid and this man is building helipad in a village! This man is mad! This man is corrupt!

Okike wrote…..
I thank God that Jonathan has vacated power for them. They ganged up against him because they considered him an outsider. Now that those who own Nigeria are in power, unbelievable things are happening and no one raises a voice. Shame!

And for those on twitter, read what they had to say below….

FG Builds Helipad For Buhari In Daura. is this part of our change? Helipad in daura? I thought the Buhari came to fight kwaraption?

No cabinet yet but Daddy Bubu is building helipad for weekends in Daura. Those cows can't be lonely. Who cares about common Nigerians?

This Daura helipad matter get as e be. A chopper can land in almost any open space o. So why helipad? Then how often will oga go to Daura?

You can do a right thing at the wrong time. Building a helipad for PMB's use in Katsina now is wrongly timed

Presidency Explains Why Buhari Has Been Slow In Presiding Over Nigeria..