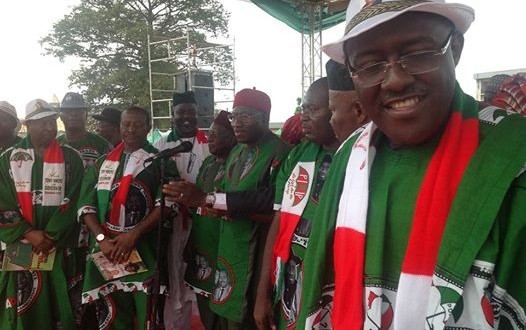 The National Publicity Secretary of the Peoples Democratic Party (PDP), has said that President Goodluck Jonathan must account for how he spent Nigeria’s resources for the past 6 years he ruled Nigeria.

This is coming as an online news platform SaharaReporters reported that some Goodluck Jonathan’s associates have released up documentary evidence that members of the National Working Committee of the People’s Democratic Party (PDP) stole funds belonging to the party’s treasury shortly after President Jonathan lost the presidential election on March 28, 2015.

Two close associates of the president spoke to SaharaReporters on what one of them described as “shameless stealing of party funds by officials entrusted with running the affairs of the party.”

The two sources disclosed that President Jonathan felt betrayed by the “greedy actions” of the NWC members. The Presidency sources gave SaharaReporters internal vouchers showing that the party’s NWC members shelled out over a quarter of billion naira in unexplained fees to themselves on April 8, 2015.

Apart from the scandalous payments, another set of documents shows that the PDP also compelled delegates to its annual convention to pay N10,000 each into the private accounts of Marufi Nigeria Limited. One of the Presidency sources described the company as a fraudulent front linked to a top member of the NWC.

One of the Presidency sources stated that the NWC members contributed in a large measure to the defeat of President Jonathan, adding that they more interested in pursuing their private material interests than the party’s corporate interest. “They were too busy helping themselves to party funds as President Jonathan’s campaign suffered.”

In a fierce rebuttal, several of the NWC members told SaharaReporters stated that President Jonathan was the architect of his own failure. “He was the person running the country, not members of the NWC. If Nigerians turned against him, it’s not because of anything the NWC did or didn’t do,” one member said.

Another NWC member accused the president and his closest associates of operating the president’s multi-billion dollar campaign using structures outside the party.

One member of the NWC accused President Jonathan of planning to hijack the party in order to place his loyalists in place in anticipation of running for office again in 2019.

The NWC member accused Governor Godswill Akpabio of Akwa Ibom State of leading the plot to remove the Muazu-led NWC.

“We are determined to ensure that nobody can just pocket a party that many eminent Nigerians contributed to establish,” one NWC source vowed.

Before going to press PDP Publicity Secretary, Olisa Metuh told Saharareporters that the payments was made to assist NWC for the Governorship and state house of assembly elections that took place on April 11th 2015. He said that since the Presidency was more concerned about transparency, they Presidency Campaign Council should publish how it gave out N700 million to each state and most importantly how the Presidency spent Nigerian resources in the last 6 years.