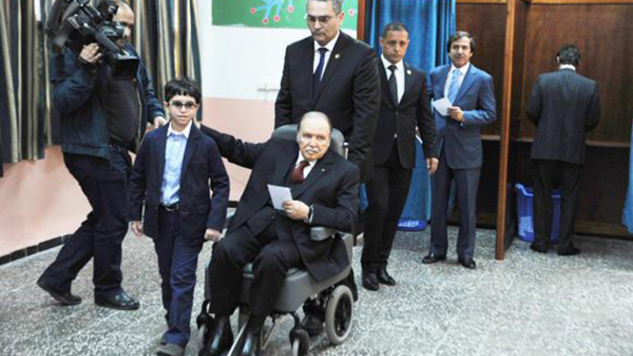 Algerians Preferred ailing President Abdelaziz Bouteflika, who cast his ballot from a wheelchair to any other President. (Photo/AFP)

The election win of Muhammad Buhari in Nigeria now means Africa’s five biggest economies by GDP are now in the hands of either former military men or leaders with armed struggle credentials.

In addition to Africa’s biggest economy, South Africa, Egypt, Algeria and Angola are run by leaders who either fought in bush wars or rode in on soldiers’ credentials, completing a stunning reversal of what had been celebrated as the rise of African technocrats.

It is also a regional trend—20 other countries share the same leadership trait, together constituting nearly half of the continent’s 54 countries.

South Africa’s Jacob Zuma is only constrained by the country’s still-strong democratic practices, but he was among those jailed at Robben Island for his anti-apartheid liberation activities and was ANC’s intelligence chief during the anti-apartheid struggle.

It appears the continent’s leading economies, scarred by conflict including with militants and separatists, are plumping for stability first. Algeria for example preferred to elect a man in a wheelchair but who could guarantee security after its scarred past rather than experiment with fresher candidates.

Among other things, Abdelaziz Bouteflika is a veteran of Algeria’s independence Army of National Liberation, a force he joined in 1956 at the tender age of 19.

Egypt has since seen a suit-wearing general muscle his way into power in the wake of a revolution that seems to have come full circle, while Angola’s Jose Eduardo dos Santos very much retains his liberation struggle credentials.

It is an ironic turn—economists, lawyers and academics had been seen as better at baking national cakes, and thus heading off discontent, but it would appear they failed the managerial test of wealth redistribution.

Their rise also coincided with with the emergence of security and non-state actors without return addresses as the continent’s major concern.

Terrorism has in recent years bumped big energy finds and technological gains from the headlines, threatening billion-dollar investment and thus support for governments.

Given the failure of economic growth to yield the expected benefits to individual citizens, there has been a renegotiation of social contracts.

Give us just that, and we will do the rest, has seemed to be the growing African sentiment, and which has been expressed both by violent revolution in the streets, and changes at the ballot box.

This has also been a byproduct of over-promising by civilian leaders, leading to their fiscal overreaching as they sought to desperately raise money to fund their pledges.

The message from the region seems to be a hybrid—democratic practices but mixed with order.

It is also scientific. A survey by Afrobarometer in 33 African countries shows that most Africans do support democracy – but also revealed some ambivalence and conflicted attitudes.

Almost all those interviewed (93%) reject at least one form of autocracy. But fewer people rejected two forms (81%) and far fewer rejected all three forms (58%). Most importantly, less than half of all Africans interviewed (46%) consistently identify democracy as the only form of government they would ever wish to have.

Essentially, what the poll result showed was a deep dissatisfaction with the type of democracy being supplied in Africa.

It is a message that will resonate with investors, who abhor leadership vacuums and like to know exactly who is in charge in a country and how safe their assets are from political movements.

It is however not a blanket endorsement for strongman types—a developing debate has been how some are exploiting this new “securitised” environment to shrink political space and criminalise dissent.

But either way, few would contest that these are exciting, if uncertain, times for the continent.