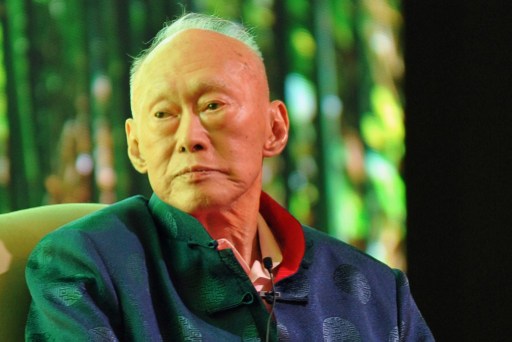 Singapore plunged into mourning and world leaders united in tribute Monday after the death of Lee Kuan Yew, the iron-fisted politician who forged a prosperous city-state out of unpromising beginnings.

He declared seven days of national mourning until the former leader is cremated on March 29.

“He fought for our independence, built a nation where there was none, and made us proud to be Singaporeans. We won’t see another like him,” the prime minister said in an emotional televised address.

Onlookers chanted “Mr Lee, Mr Lee” as a white hearse carrying his remains entered the Istana state complex at midday for a two-day private family wake before lying in state at Parliament House.

At the entrance, Singaporeans, some teary-eyed, left personal tributes and signed a condolence board.

US President Barack Obama led world leaders in hailing Lee, who turned a small territory lacking its own natural resources into a world player in finance, trading and shipping — all the while with a heavy political grip that was long decried by rights campaigners.

“He was a true giant of history who will be remembered for generations to come as the father of modern Singapore and as one of the great strategists of Asian affairs,” Obama said in a statement.

China lauded Lee’s “historic contributions” to their relationship after the Communist leadership embarked on dramatic economic reforms from 1978.

President Xi Jinping said Lee was “widely respected by the international community as a strategist and a statesman”.

Tributes also came in from a host of international leaders including UN Secretary-General Ban Ki-moon and the prime ministers of Malaysia, Britain, Japan and Australia.

“I am often accused of interfering in the private lives of citizens. Yes, if I did not, had I not done that, we wouldn’t be here today. And I say without the slightest remorse, that we wouldn’t be here, we would not have made economic progress, if we had not intervened on very personal matters – who your neighbour is, how you live, the noise you make, how you spit, or what language you use. We decide what is right. Never mind what the people think.”
Lee Kuan Yew

“To straddle the middle ground and win elections, we have to be in charge of the political agenda. This can only be done by not being beaten in the argument with our critics. They complain that I come down too hard on their arguments. But wrong ideas have to be challenged before they influence public opinion and make for problems. Those who try to be clever at the expense of the government should not complain if my replies are as sharp as their criticisms.”
Lee Kuan Yew, From Third World to First: The Singapore Story: 1965-2000.

“I ignore polling as a method of government. I think that shows a certain weakness of mind – an inability to chart a course whichever way the wind blows, whichever way the media encourages the people to go, you follow. If you can’t force or are unwilling to force your people to follow you, with or without threats, you are not a leader.”
Lee Kuan Yew

“Mine is a very matter-of-fact approach to the problem. If you can select a population and they’re educated and they’re properly brought up, then you don’t have to use too much of the stick because they would already have been trained. It’s like with dogs. You train it in a proper way from small. It will know that it’s got to leave, go outside to pee and to defecate. No, we are not that kind of society. We had to train adult dogs who even today deliberately urinate in the lifts.”
Lee Kuan Yew

“I started off believing all men were equal. I now know that’s the most unlikely thing ever to have been, because millions of years have passed over evolution, people have scattered across the face of this earth, been isolated from each other, developed independently, had different intermixtures between races, peoples, climates, soils… I didn’t start off with that knowledge. But by observation, reading, watching, arguing, asking, and then bullying my way to the top, that is the conclusion I’ve come to.”
Lee Kuan Yew

“Supposing Catherine Lim was writing about me and not the prime minister…She would not dare, right? Because my posture, my response has been such that nobody doubts that if you take me on, I will put on knuckle-dusters and catch you in a cul de sac…Anybody who decides to take me on needs to put on knuckle dusters. If you think you can hurt me more than I can hurt you, try. There is no other way you can govern a Chinese society.”
Lee Kuan Yew

“Political reform need not go hand in hand with economic liberalisation. I do not believe that if you are libertarian, full of diverse opinions, full of competing ideas in the market place, full of sound and fury, therefore you will succeed.”
Lee Kuan Yew

“He took over, and he said: ‘If I have to shoot 200,000 students to save China from another 100 years of disorder, so be it.'” – Recalling how former Chinese leader Deng Xiaoping dealt with the 1989 Tiananmen Square protests”
Lee Kuan Yew

“Put it this way. As long as Jeyaretnam [Workers’ Party leader] stands for what he stands for — a thoroughly destructive force for me — we will knock him. There are two ways of playing this. One, a you attack the policies; two, you attack the system. Jeyaretnam was attacking the system, he brought the Chief Justice into it. If I want to fix you, do I need the Chief Justice to fix you? Everybody knows that in my bag I have a hatchet, and a very sharp one. You take me on, I take my hatchet, we meet in the cul-de-sac. That’s the way I had to survive in the past. That’s the way the communists tackled me. He brought the Chief Justice into the political arena. He brought my only friend in university into our quarrel. How dare he!”
Lee Kuan Yew

“That was the year the British decided to get out and sell everything. So I immediately held an election. I knew the people will be dead scared. And I won my bet big-time. The gullible fools! ”

“You know, the cure for all this talk is really a good dose of incompetent government. You get that alternative and you’ll never put Singapore together again: Humpty Dumpty cannot be put together again… my asset values will disappear, my apartments will be worth a fraction of what they were, my ministers’ jobs will be in peril, their security will be at risk and their women will become maids in other people’s countries, foreign workers. I cannot have that!” – Justifying million-dollar pay hike for Singapore ministers”
Lee Kuan Yew

“If, for instance, you put in a Malay officer who’s very religious and who has family ties in Malaysia in charge of a machine gun unit, that’s a very tricky business. We’ve got to know his background… I’m saying these things because they are real, and if I don’t think that, and I think even if today the Prime Minister doesn’t think carefully about this, I and my family could have a tragedy.”
Lee Kuan Yew

“When you’re Singapore’s leader and your existence depends on performance – extraordinary performance, better than your competitors – when that performance disappears because the system on which it’s been based becomes eroded, then you’ve lost everything… I try to tell the younger generation that and they say the old man is playing the same record, we’ve heard it all before. I happen to know how we got here and I know how we can unscramble it.” – On one freak election result ruining Singapore”
Lee Kuan Yew

“If Mr Mah is unable to defend himself, he deserves to lose. No country in the world has given its citizens an asset as valuable as what we’ve given every family here. And if you say that policy is at fault, you must be daft.” – when asked about a Straits Times report that cited keen opposition interest in contesting Tampines GRC, which National Development Minister Mah Bow Tan helms, so that they can raise the affordability of public housing as an election issue”
Lee Kuan Yew

“The task of the leaders must be to provide or create for them a strong framework within which they can learn, work hard, be productive and be rewarded accordingly. And this is not easy to achieve.”
Lee Kuan Yew, The Singapore Story: Memoirs of Lee Kuan Yew