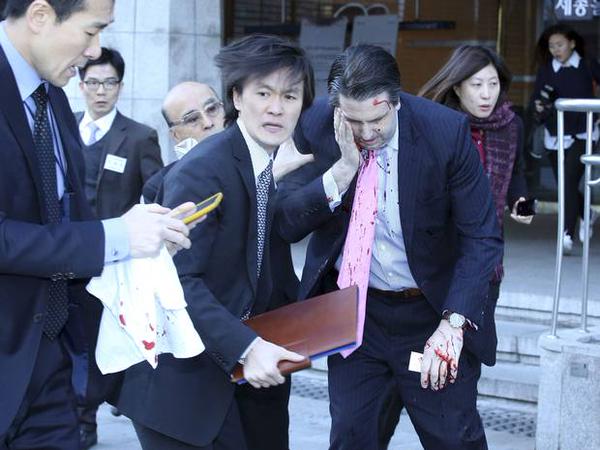 North Korea has hailed the bloody assault on the US ambassador to South Korea this morning as “deserved punishment” carried out by “the knife of justice”.

Kim Jong-un’s regime has denounced the drills as preparations for an invasion, but a South Korean military official said they would not be derailed by the Seoul attack and are due to go ahead for eight weeks as planned .

Mr Lippert, 42, has issued his own reaction to the incident which left him bleeding across a breakfast meeting table at a government arts centre across the street from the US embassy.

He is expected to stay in hospital for four days after receiving 80 stitches to a gash on his face and nerve damage to the wrist, but wrote in a tweet: “Doing well and in great spirits… Will be back ASAP to advance US-ROK [Republic of Korea] alliance!”

South Korean police are reportedly investigating whether the assailant, identified as 55-year-old Kim Ki-jong, had any ties to North Korea. Witnesses said he shouted a pro-unification slogan before slashing at the diplomat with a small fruit knife.