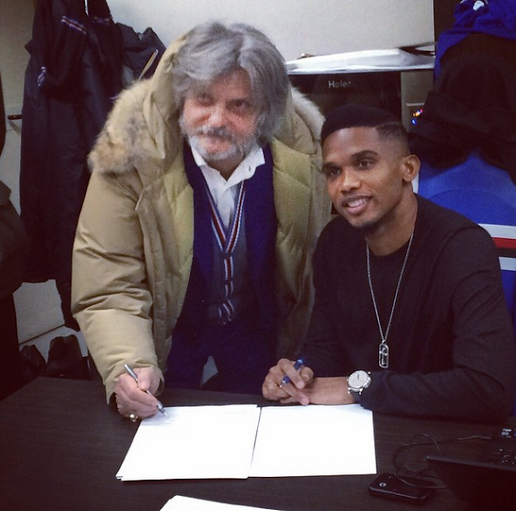 Cameroonian legend and arguably, the greatest African football import to Europe, Samuel Eto’o has signed a three and half years contract with Italian Serie A side, UCD Sampdoria, for an undisclosed fee.

The 33 year old, only joined English premiership side, Everton in the summer, but was unable to tie down a starting berth, amid other off field issues. The striker, who returns to Italy, for a second stint, is well travelled across Europe, having played for Real Mallorca and giants, FC Barcelona in Spain.

The talented attacker, went further to play at Inter Milan, a hugely successful spell, before moving to Russia, for moneybags Anzhi, and then joining old foe and seasonal friend, Jose Mourinho at Chelsea, for a season stint. Eto’o then signed for Roberto Martinez’s last summer, and spent five months in a two year deal, before his current ‘Italian job’.