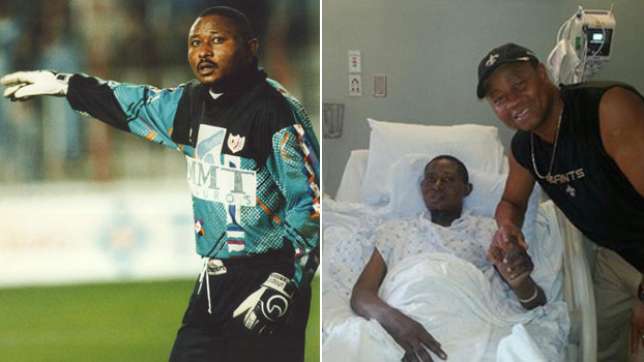 Nigerian football has been hit with the news of death of former Super Eagles coach, Musa Abdullahi and ex-international goalkeeper, Wilfred Agbonivbare.

Former coach of the Nigerian national football team, Musa Abdullahi died on Sunday, the 25th of February, 2015; after losing his battle with stroke. Late Coach Abdullahi served the national football team at the various youth cadres. He was part of the coach Fanny Amun bench, that led victorious under 17 Eagles,to the 1993 Under-17 World Cup.

The sad news of the death of former goalkeeper, Agbonivbare, came a few days after his battle with cancer, was announced. The former Rayo Vallecano stopper, reportedly died of cancer in Spain in the early hours of Tuesday morning.Agbonivbare, who was a member of the Nations Cup winning squad in 1994 and the Atlanta 1996 Olympic Games gold winning team, had been treated for the ailment in the US, but asked to return to his home in Europe three weeks ago.His death comes after Spanish newspaper, Marca, confirmed that Vallecano had raised money for his treatment. Daily Post reports that, Agbonivbare’s wife also died after a prolonged battle with cancer years ago and he leaves behind young children.

Related Topics:Nigerian Football Federation
Up Next

Game Over!!! Riquelme Announces His Retirement From Football