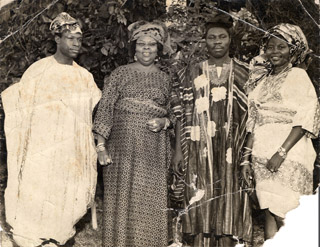 From his base in Ilorin, retired Brigadier Godwin Alabi-Isama this morning sent his caustic response to General Olusegun Obasanjo’s three-volume memoir, My Watch.

In a telephone conversation with P.M.NEWS, Alabi-Isama described Obasanjo as an incredible liar and said that if he had read Obasanjo’s book before it was presented in Lagos last Tuesday, 9 December, he would have gone to the venue to challenge Obasanjo.

He said “the tragedy of our civil war is painful, but that Obasanjo is publishing fiction about it is so outrageous. We should not allow this liar to get away with his self-serving lies.’’

Here is the text of Alabi-Isama’s response:

“I’m gravely pained to be trading words with General Olusegun Obasanjo once again on the history of Nigeria-Biafra War. He is an elder and a former ruler who, ordinarily, should be treated with utmost respect. But how can one genuinely respect an old man who tells lies like a badly raised child? Obasanjo has obviously not recovered from the shock inflicted on him by my book, The Tragedy of Victory in which I exposed the tissues of lies in his civil war memoir, My Command. It is said that a lie may travel for a thousand miles, but it takes just one step of truth to catch up with it.

“I’m alive to stand up to him on the lies he has told on the war because I was a major participant in it. I kept records. With facts and figures at my finger tips, I have debunked Obasanjo’s lies in part three of my book, consisting of one hundred and sixty five pages, sixty nine pictures, thirteen military strategies and tactics, maps and documents. This was the same Obasanjo who published a fake Federal Government gazette that I was found guilty by the Army when I was never tried. I have proved that Obasanjo was an incompetent commander. I have proved that he was a wily and cunning fellow, and an incredible opportunist who reaped where he did not sow.

“I have proved that he was an ingrate and a hypocrite. More importantly, I have proved that he was a coward, who ran away from the war front to go and look for phantom ammunition. Rather than respond to my claims the way a gallant officer should, he has now responded like a motor-park tout, impugning my person and questioning my ethnic lineage. I never said I was from Ibadan. I only schooled there. General Obasanjo, this bolekaja style is so demeaning. You live in a glass house, so stop throwing stones. We, who have facts, pictures and documents, meticulously kept over the years, can tell the whole world one or two things about you.

“Have a look at this attached picture at your wedding to your first wife Remi. When the photographer wanted to take the picture of the bride and groom and their parents, you said a few things about your parents which I still remember. It was only Remi’s mother that took the picture with us. Please, don’t mess with the memory of my dear parents. You know my mother, an Ilorin woman, and you also saw her at the war front. She told me who my father was and she spoke his language, and took me to his home town when he died. I went to primary school in Owu, so I know your family very well. You should be honest enough to tell the world the story of the man who was your father. I told you and wrote in my book that any person who does not appreciate the efforts of women has had no good mother. Please, don’t go beyond military tactics and strategies when dealing with me.

“You say in volume three of your book My Watch that I could be in bed with a woman while radioing my commander that I was in pursuit of rebels. Hundreds of thousands of those who have read my book The Tragedy of Victory——a six hundred and seventy-page book, complete with four hundred and fifty pictures and thirty nine military strategies and tactics, maps and documents—- will call you a liar. I am so surprised and even embarrassed that a man of your status is still trading in gutter rumours. An elder with a filthy mind, a leader who lacks wisdom of age, does not deserve any respect.

“I’m the same Godwin Alabi-Isama that commanded the troops that liberated today’s Cross River State in thirty days of battle from Calabar to Obubra with no single casualty. This is the same Alabi-Isama that advanced 480 kilometres in 30 days from Calabar to Port Harcourt, liberating today’s Akwa Ibom, Rivers and Bayelsa States with 35,000 men and women with 15000 on logistics, building roads and pontoons, with 8 men and 2 officers as my casualties. Obasanjo ordered the attack of Ohoba, a mere 24 miles from Owerri, in one hour of battle, more than 1000 Nigerian soldiers were dead.

“Obasanjo claims that when I once played squash with him, I cheated. This incredible liar has forgotten that there were witnesses to that game. Those witnesses are still alive, and they remember what really happened. I played squash with him once in my life. He could not make a point because I was not one of his sycophants who would allow him to win a game just to massage his huge ego. Look, General Obasanjo, there was no way you could have beaten me in any game. You do not have the physique and agility to do that. Apart from being a popular sports man and soccer captain in Ibadan Boys High School, I was Sports Officer in the Nigerian Army, playing games from soccer to tennis, athletics etc. You never played any games at school let alone in the Army. If you had been diligent at your physical exercises as we were taught to be, your protruding tummy would not have become a butt of joke to many officers and men of the Army.

“General Obasanjo may try but he cannot deny the evidence of the civil war tragic history. While he got over a thousand soldiers killed at Ohoba, myself, Alani Akinrinade, and the brilliant and hardworking Pincer Team of Ola Oni, Iluyomade, Isemede, S.S. Tomoye, Salawu, Okwarobo, Sunny Tuoyo, etc. did a better job at the Third Marine Commando. I have stated how it was done in The Tragedy of Victory, by writing to set the Civil War records straight. Obasanjo says I only wanted to make money that was why I wrote my book, after all I was broke. I thank Obasanjo for unwittingly giving credit that I did not steal money in the Army. I believe that this country Nigeria ought to know by now all the crooks parading themselves as saints. Now I know why Obasanjo was surprised at my financial successes abroad, and then sent his wife Stella of blessed memory to me. She was my guest in Houston Texas for a week. We have video and pictures of the visit with witnesses like Jack Gonsoulin, Rod Anthony, and Tom Britton.

“I challenge Obasanjo to a debate on military tactics and strategies on the Nigerian Civil War. He wrote about his team. Who were they? George Innih went the wrong way to Arochukwu when Akinrinade needed reinforcement for the final battle to capture Uli Ihiala airport. Akinrinade told him that he would shoot George Innih anytime he showed up. Where was Obasanjo’s fake Apollo Battalion that operated behind enemy lines, when he could not capture Ohoba? When Akinrinade called him that Biafra troops had surrendered to him and the Pincer team, Obasanjo, who was coming from a party, got lost looking for them, as he did not know where to go and did not know the way to Amichi.

“I am not qualified to comment on Obasanjo’s political achievements, if any, for this country. The people and posterity will do that. There is no president in this country that he has not condemned. Haba! He always thinks that he has the preserve of knowledge on how to rule this country. Did the country move forward when he was Head of State or President? He destroyed the heart of the national security. We can see the result today. He destroyed education in many ways. We see the result today. He destroyed a lot of other things. As for how he has treated his family shabbily, his wife and children have openly made their comments. Those comments are in public domain today and forever, even though Obasanjo cleverly brushes them aside in his current book.

“I implore Obasanjo to stop lying before he dies.”