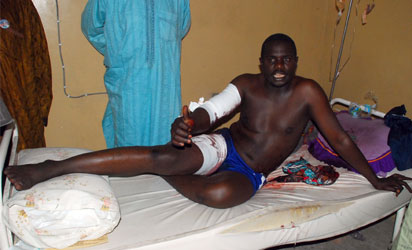 Following the explosions today at the Kantin Kwari Market area in Kano metropolis, rescue workers and security operatives have evacuated all persons affected by the blasts to hospitals and cordoned off the location to forestall the danger of any secondary explosions.

Only two weeks ago, suspected members of Boko Haram insurgents, killed over 200 Muslim worshippers, who were sent to their grave by a triple blast that rocked Kano Central Mosque, where the Emir of Kano normally leads prayers.

NEMA Press Officer said the blasts occurred at about 3 pm. The victims were evacuated to the nearby Murtala Muhammad Specialist Hospital and Nassarawa Hospital where they presently being treated of the various degrees of injuries that they have sustained.

Rescue officers from the North West zonal office of the National Emergency Management Agency(NEMA) led by Musa Ilela joined state officials, security operatives and local sympathizers at the scene in carrying out the rescue and evacuation. At least more than 29 persons were rescued from the blast and taken to the hospital.

It will recall that less than forth night ago on Friday at the Mosque in the Palace of the Kano Emir there was similar explosions which was followed by sporadic shooting resulting in the deaths and injuries of many worshippers. Some of the injured persons are still recuperating in different hospitals. The National Emergency Management Agency had recently distributed medical supplies to the hospitals to support the treatment of the bomb explosions.

The National Emergency Management Agency advises the public to stay away from the location of explosion until security operative have cleared it as safe enough.