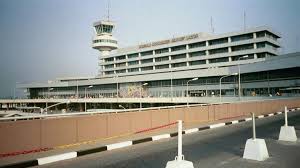 There was pandemonium at the Murtala Mohammed International Airport,  Lagos on Wednesday as a Nigerian, who had already been cured of Ebola Virus Disease in Sierra Leone arrived aboard Royal Air Maroc.

The Moroccan airline arrived Lagos from Casablanca at 6am. The victim, one Theophilus Onnakhinon, a Nigerian, was said to have been flown into the country by the airline, while his younger brother, Chinedu Eroka, absconded from Sierra Leonean authorities.It was not however clear why Eroka absconded.

A source close to the Port Health of the Airport confirmed that the victim had already been treated of Ebola virus in Sierra Leone and cured of the disease by the health authorities of that country after some weeks in their custody.

The source who doesn’t want to be named as he was not allowed to talk to the media on the issue said that the victim was assisted into the country by the Nigeria’s consular officer, Mrs. T. Mohammed.

According to the source, the consular officer accompanied the victim into the country in order to avoid stigmatization by the Nigerian health officials and other authorities at the airport.

On arrival in Nigeria, the victim was immediately handed over to the Port Health officials at the Lagos airport who immediately isolated and quarantined him.

As at the time of filing this report, the victim was said to still being observed by the Port Health officials.

The source said that the essence of his being quarantined in the country was for the Nigerian officials to also check his health status and confirm that he was free of the disease before being released to the public.

The source said, “It is true that there was Ebola scare at the Lagos airport today, (yesterday) but the fact is that the victim had been cured of the disease in Sierra Leone before being assisted into Nigeria by our consular officer in that country and immediately he landed, he was handed over to the port health authorities who immediately carried out checks on him and isolated him from the other passengers.

“But, the truth is that we just want to recheck what has already been done by the Sierra Leonean authorities. You know, we cannot take chances again in the country. I can assure you that the situation is under control.”

It will be recalled that the Liberian who brought the disease to Nigeria also came into the country through the Lagos Airport.

Herdsman Kills Friend For Sleeping With His Wife, Remanded In Prison