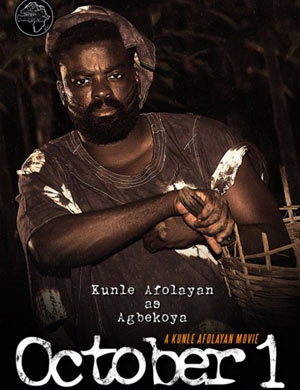 The movie, October 1 is brilliant, thought-provoking and timeless. October 1 preaches the truth and it does so from an artistic point of view. Kudos must be given to Tunde Babalola for writing such an amazing script and also to the producer/director of this movie for breathing life into the story.

Mr. Afolayan is fast garnering the reputation of a filmmaker who goes a notch higher for every new movie he puts out. For October 1, he went several notches higher and has once again set a benchmark for aspiring filmmakers across the continent. He has proven that his previous successes with movies such as Irapada, the Figurine: Araromireand Phone Swap was no mere fluke.

The movie’s synopsis revolves around a Northern Police detective, Danladi Wazari (which was played by the very articulate screen-god, Sadiq Daba) and his arrival at the South-Western village of Akote so as to help unravel the mystery behind the killings of female virgins in that community during a period close to Nigeria’s independence from their colonial masters, Britain.

As for most movies, this synopsis does not do justice to the movie which is purely the story of Nigeria and the lack of unity and tolerance among the various ethnic groups. The movie is indeed about the most populous black nation on earth which is still dependent even in independence. The movie is about the corruption which has eaten so deep into a nation since its independence. The movie dissects Nigeria’s past and then casts his focus towards the nation’s present state and even the future.

The cinematography of the movie is world-class and kudos must be given to Yinka Edwards who was the D.O.P on set. When you see the movie, you don’t need to be told that the best cameras and editing tools were used for the production of this timeless movie. It was always going to be difficult to pull through a movie which was set in 1960 successfully and attention to details was needed. The crew behind the movie did that perfectly as we did not see mobile phones, recent billboards or any fatal errors of such. This must have been due to the meticulousness of the production designer, Pat Nebo who has previously worked with Mr. Afolayan. Yes, Kunle Afolayan knows how to keep a winning team.

October 1 is such a good movie that it has the power to plunge every well meaning Nigerian into a reflective mood and possibly positive action. 54 years after Independence and we are still faced with the same problems which stared us in the face back in 1960? One of the characters in the movie, the King’s son, Aderopo (which was played by Ademola Adedoyin) rightly predicted the Nigerian civil war when he stated in the pub that few years after 1960, Nigerians will realize that we maybe became independent a few years earlier than we should have. The nomad, Usman Dangari who was killed by Okafor (Kanayo.O.Kanayo) just because he was a Northerner and was assumed to commit a crime he never did is very symbolic. That scene represents the thousands of Nigerians who till today are denied a job or whatever right or privileges they duly deserve simply because they are from a particular ethnic group or not.

With October 1, Mr. Afolayan has explored themes most Nigerian filmmakers will tactfully avoid because they are scared of controversies and what the perception and reaction of the audience (their market) will be. This movie touches on forceful pederasty and rape in a way that will spur other filmmakers to ignite further discussion in that direction especially as it sometimes involves guardians and religious leaders who are supposed to be custodians of our moral standards. The story-line of this movie is no doubt, more than impressive.

Whoever was in charge of the grooming and makeup of the cast is a genius and deserves plenty of commendation. It was after watching the movie that I realized while surfing the internet that the role of Corporal Omolodun was played by Fabian Adeoye Lojede of Jacob’s Cross; that shows how much detailed-attention was given to the movie.

Without a doubt, Kunle Afolayan is a genius and a great businessman. His choice of characters for the movie attests to this fact. The singular choice of Sadiq Daba for the role of Inspector Waziri can triple the number of movie lovers heading to the cinemas to see this movie. The silver-tongued Sadiq Daba undoubtedly played his role perfectly with a calm demeanor and finesse needed for such a tasking role. Also, the fact that Sadiq Daba is popular and attractive to the older generation for his role as Bitrus in Cock Crow At Dawn back in the 70s and 80s and his time with the Nigerian Television Authority (NTA) has positive commercial implications. At the cinema where I saw the movie, the audience started to clap as soon as they saw Kanayo.O.Kanayo in his first scene; that’s instant appreciation of the choice. Also, the choice of Aderupoko as Sergeant Afonja also proved to be a mild comic relief in the thought-provoking movie; his funny translations and pronunciations left the crowd reeling with laughter.

WARNING: Every Nigerian who does not watch this movie does so at his/her own peril.

Blame FG For Oritsejafor’s Travail – CAN