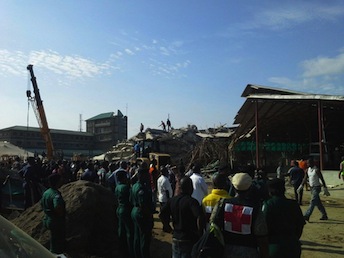 South African Authorities yesterday said it has only been able to identify the body of 62 of the victims of the collapsed Synagogue Church of All Nations building. This was made known by Minster Jeff Radebe, the leader of the inter ministerial team set up by President Jacob Zuma.

He said that a five-step process of identification on the bodies of the South Africans killed in the building collapse has commenced. He described the identification process as a “methodical and time consuming process, and one would not be able to predict the exact time-frames for completion.”

“On the issue of the bodies, right now, the team that is there in Lagos has been able to identify with certainty 62 South Africans. As you know there are 115 deceased in this tragedy, and 84 of the 115 are South Africans, so we still have a long time to go,” he said, adding that he meant not long in terms of time, but in effort.

“government was committed to ensuring that all those killed were accurately identified, and their bodies brought home. We want to assure the South African nation that we shall spare neither strength nor effort in ensuring that the deceased are repatriated back home.

“We believe that the repatriation of the deceased is the crucial first step in helping the families find closure in the aftermath of this terrible tragedy.”

He added that “a South African team of experts on the ground in Nigeria is working closely with their Nigerian counterparts to ensure that this process is completed as soon as possible. The process involved either identification of bodies by next of kin, through photo identification, from fingerprints, from dental records, or – if all these were not possible – through DNA.

“Our government appeals to the families and the nation to bear with us as we allow our team in Lagos the necessary time to complete this process. All efforts were being made to keep the identification process as short as possible.”