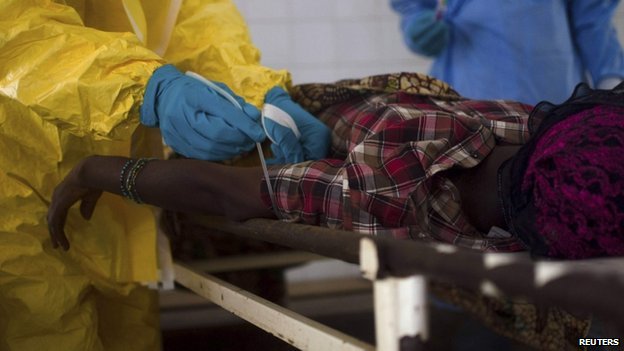 A Sierra Leone woman who fled hospital after testing positive for the Ebola virus has died after turning herself in, health officials have told the BBC. Her family had forcibly removed her from a public hospital on Thursday.

Saudatu Koroma’s is the first case of Ebola to be confirmed in the country’s capital Freetown, where there are no facilities to treat the virus.

Since February, more than 660 people have died of Ebola in West Africa – the world’s deadliest outbreak to date.

Nigeria has put all its entry points on red alert after confirming the death there of a Liberian man who was carrying the highly contagious virus.

The man died after arriving at Lagos airport on Tuesday, in the first Ebola case in Africa’s most populous country. The outbreak began in southern Guinea and spread to Liberia and Sierra Leone.

Reports on Saturday said that a prominent Liberian doctor, Samuel Brisbane, had died after a three-week battle with the virus.

And later it emerged that a US doctor working with Ebola patients, Kent Brantly, was being treated for the virus in a hospital in the capital Monrovia.

Street protest
The virus, which kills up to 90% of those infected, spreads through contact with an infected person’s bodily fluids. Patients have a better chance of survival if they receive treatment early.

Ms Koroma was the first registered Ebola case in the capital Freetown. Both she and her parents – who are suspected of having the virus – had been taken to Ebola treatment centres in the east of the country, health ministry spokesman Sidi Yahya Tunis told the BBC.