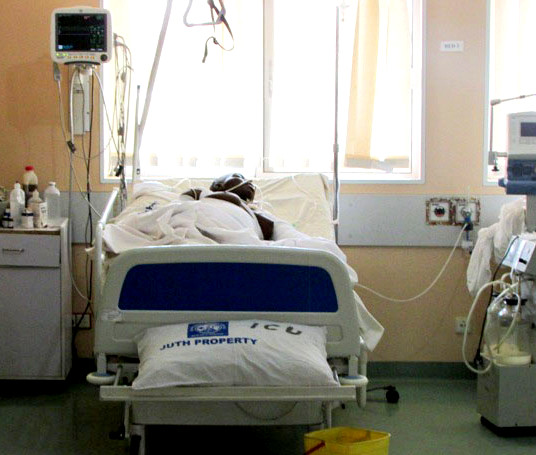 The hallway of tears and sorrow. Sarah Samuel sits on a chair feebly answers the greetings of get well soon, her head is spots a low cut, her entire back is a mass of bandage, she has burns on her face and her hand are bandaged.

Her care giver hands her tablets to take. How did it happen I ask? “I was frying yam and Akara when suddenly I heard a huge explosion ‘Gbouum’ then it threw me away to the wall. When I was able to standup I saw a girl burning, she was a student, her books were not far from her and so I helped her quench the fire. As I turned I saw another man also on fire then I run to him and help him quench it. Both of them didn’t make it. It is after that time that I realize that my entire body was blood. Then I manage to walk to Old Juth, but the security men said I should try and go New Juth that there are no doctors there.

That is how I find myself here”. In her pain she gives thanks to God for surviving the May 20, 2014 Twin blasts in Jos. Not far from her bed, is young Mercy Iregbe who was also caught up in the blast, she is fortunate, her wounds are healing she says a smile that belies the pain and horror she had endured in the last 3 weeks. They are all part of the 59 survivors that were brought to JUTH in the after of the explosion in the city. According to the Chief Medical Director, they have had to amputated several survivors, treat some for severe burns and have also received several referrals from the initial 42 that were brought to the hospital. In all forms of the journalism I practice trauma reporting is one of the most difficult as it is nearly impossible for the reporter to tear themselves away from the pain and hopelessness of the subjects. One left the ward rounds feeling how ephemeral life was and wondering once more how and when this cycle of violence was going to end.

Driving through uneasy calm Driving into Jos around Bukuru the tension was palpable, groups of young and agitated men and a handful of women had formed cycles arguing fiercely, some meters away 3 pick-up vans of the police and army from the STF had just arrived and had engaged in a conversation with them. We drove further a bit passing more groups of people, passing shop owners closing shops. We saw a group of mobile policemen doing what looked like a recon. We stopped and asked. What is going on here: “A man was killed yesterday, he was a Northern man, so the youths are out, trying to cause trouble and we are here appeasing them. We have told them to live everything to God”.

We thank them and drive ahead passing side streets being cordoned off by the ubiquitous chain of used car tyres. The commotion caused a traffic gridlock, glancing at other motorists their unease was palpable. We were all thinking the same thing –a disagreement amongst the tensed youth can send a violent vibration to the spot of the traffic gridlock –since it was about 5 minutes away. Aside that the continuous congestion could be a target to the terrorists; these scenarios are the pitfalls of terrorism. It begets a terrorized populace praying for safety, but living within the ambits of perpetual paranoia. The Scene of death The crater lies near the road divider, the circumference on the macadam is huge, however the effect of its impact goes far beyond the crater.

Even shops near Old JUTH have been left with peeled tiles and broken cement floors, a class room at Old Juth is left in ruins opposite the crater, 3 blocks destroyed, on the wall a notice board holds pictures –another pointer to how this violence has usurped the order of things. Down the road is the smaller crater, as people were rushing from there to come and help people here, another bomb went off there.

You see some people who got injured here, died in the second blast, a trader tells us. Locked shops and economic survival A soldier and a mobile policemen are busy folding their tent, the market is under their watch to prevent looting, the entire stretch from Old JUTH to Terminus Market which over the years had morphed into a commercial district was now desolate on the stretch now are some destroyed shops, though far away from the scene, the strong impact of the bomb still affected them.

Paul Amoebi said when the bomb went off it was as if it was Hiroshima he said comparing it to the epochal incidence of WWII. For Amoebi and the rest of the traders, they have counted their losses and moved on; but every day the market remains bears a story of utmost frustration and mounting economic losses in their retail business.

A people in search of peace The people of Jos, resilient as ever are slowly bouncing back to the grind of everyday life. But beneath the veil of normalcy, is the uneasy fear of what could go wrong again, the peace here is fragile, the residents know too well of the effects of violence and the aftermath. Whatever it takes the peace must be negotiated and sustained.

Alkasim Abdulkadir: NOUN, E-learning A Ladder Out Of Our Educational Abyss