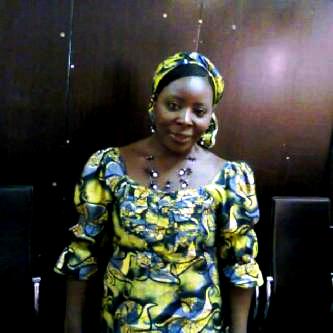 She is fondly called Mami, Ashe Peters was loved by everybody, and her employer Mrs. Zakari Imam described her as an exceptional human being. The Nyaya to Central area Abuja route had been her route over the years like several other thousands of civil servants and artisans who commute daily to work in Nigeria’s capital city of Abuja.

To get to work in time before the day’s tasks, to beat traffic as it is called -the commuters always left their abodes early, especially Ashe who had never been late in arriving at her office as Mrs Imam’s assistant   “She was a honest, hard working and wonderful person loved by all her colleagues and anyone who had the privilege of knowing her” she averred.

However, on Monday April 14th 2014 she left home as dutiful as always but never showed up for work, she didn’t show up because she never got there. Alas, she didn’t get there because at exactly 6.30 am a vicious bomb explosion ripped through the Elrufai Bus Park at Nyaya, killing scores of people. Some of the dead and injured were taken to Nyaya, Asokoro General Hospitals and National Hospital. However, several more are still on the missing list, never to be seen again by their loved ones. Mami isn’t just a number, in a country already suffering from tragedy fatigue from the statistics of the dead, it has become imperative for us to remind ourselves that she was here and she was human too like the rest of us. Ashe Peters lived with her brother in Nyaya she was in her late twenties and would have added a year more on the 21st of April; she went missing exactly a week to her birthday.

The days have been passing by, there have been long tortuous  and traumatic searches for her in all the hospitals and the hope of finding Mami is fast deeming. Her families and friends are slowly coming to terms with the fact they might never see her again. Therein lies the greatest tragedy of losing her, for Mrs. Zahra Bakari-Imam the tears have refused to stop “I went to sleep crying, woke up crying I am still crying”.

Like Mami, Eze the mechanic, Mohammed Babangida, Abu and several others we will never know, they were all human beings with dreams like the rest for us, their only crime remains waking up and catching a bus to earn a living. At the end of the day, this veil of insecurity covers us all, no one is immune to it…not numbers they were human.