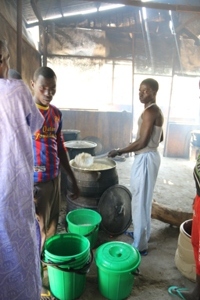 Perhaps few places in the world glorify the male gender or male privilege like Nigeria. Here a traffic accident can lead to the bragging statement of -I have someone like you at home.

The deep and ingrained state of patriarchy is such that some men still find it hard to work under female bosses. In Nigeria male and female socialization still suffer from the ills of societal perception, the narrow cocoon of culture and the misapplication of religious scriptures and expected obligations. A new research in Nigeria titled -Being a man in Nigeria, perception and realities – a landmark field work done by V4C Nigeria, further explains this status “Religion both reinforces and challenges perceptions of male dominance and gender roles in Nigeria.

Men were perceived to express their ‘masculinity’ in religious spaces so they could be seen as respectable and religious, for example through leading prayers. For their part, women were seen to support men in their roles by cooking and caring for the family, and providing for the family in the absence of a man. However, it was mostly agreed that neither Christianity nor Islam explicitly specifies roles for men and women and these roles and responsibilities were determined by cultural factors.

The research has therefore highlighted a contradiction: that men and women believe men’s dominance over women is God-given, but their role in practice can be culturally determined. Leadership is seen as a largely male occupation. This is informed by religious cultures and traditions, rather than religious doctrines. Leaders were seen as religious people who were selected by God to guide people but religion itself was not seen as promoting men’s superiority over women as leaders, or acting as barrier to women in leadership positions”

The report states. With the passing of the Violence Against Persons Prohibition Bill VAPP Bill at the twilight of the Goodluck Jonathan administration, one is awaiting the deployment of this law to ensure that gender based violence in Nigeria is brought to a minimal. However this is not the case according to this same research under their Masculinity and violence against women section. It states with that perception of masculinity influence relationships between men and women, contributing to violence against women. According to the report in Nigeria, 28% of women aged 15 – 49 have experienced physical violence at least once; although it is likely this is a gross underestimate.

Despite this, men’s continuing behavior towards their families and communities keenly indicates a highly masculine social identity in Nigeria, and explains the often traditional ways that women are viewed by men and vice versa.

More findings in the research that spanned several states in Nigeria also lists intimate partner value as being as high as 40% which includes the perpetrating of economic, emotional or physical intimate partner violence and also that over two-thirds of women (42%) have experienced at least one of these forms of violence during their lifetime. This is influenced by a number of factors, including the culture of silence amongst women and others affected by violence. The report goes to show that in spite of the campaign to change behavior via legislation still more than half of men and women (66% of men and 71% of women) believe that women should tolerate violence to keep their families together, though roughly the same number also believe that physical violence against women is not justified under any circumstances; so also 40% of men had come across campaigns working to prevent violence against women, though this varied significantly across states (52% in Lagos and 19% in Benue).

The 2015 election showed a dismal outing for women as only 6.5% of women senators, and a similar situation across public and private sectors. This threw up a general consensus that women are good leaders with 77 percent of the population agreeing. Even though it is agreed that they make good leaders however it seems there is not enough inherent good to grace the political podium. One key area that is often ignored but plays a pivotal role is the Media.

This medium according to the landmark report promotes non-equitable gender images and messages that highlight male dominance and leadership. The report further stated that successful men were portrayed as responsible, rich, competent, professional and as decision-makers. They were seen as the economic providers for the family, as sexually active, and sometimes unfaithful to their partners, which is often not portrayed in a negative light. More than two thirds (66%) of news stories analyzed related to men as leaders and one third (34%) were related to women as leaders.

This imbalance in coverage may contribute to a perception that women are less capable than men to lead, as few of them featured. Men were more likely to be mentioned in conjunction with leadership in sectors such as business and politics. The report is not only timely but needed against the backdrop of falling and failing gender imbalance in Nigeria, after several years of paying attention to the girl child and women folk, this novel research shows that indeed to get it right we must fix broken boys or end up with broken men. •