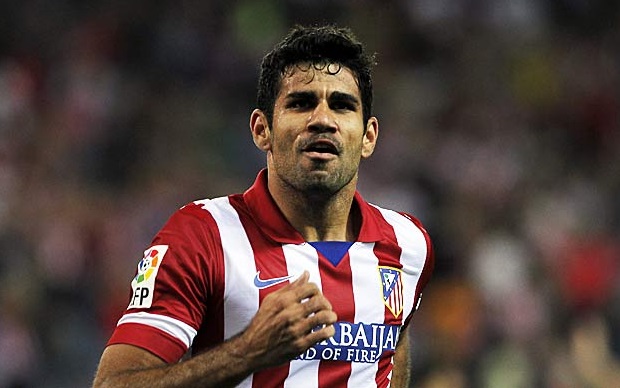 There is a huge chance of Athletico Madrid’s star forward, Diego Costa joining Chelsea this summer if comments by Athletico manager, Diego Simeone are anything to go by.

Speaking to Al Primer Toque, Simeone said he is not surprised that his players are attracting interest from wealthier clubs.

He also made a case for unimpressive Chelsea striker, Fernando Torres who he seems interested in bringing back to Madrid where the Spaniard’s career initially flourished.

He is also aware of Chelsea’s interest in Diego Costa and he insists he has no problem with the striker moving to London next season.

“Torres is always in contact with the team to wish them luck and occasionally sends me messages. He is delighted with everything that’s happening at Atleti.
“How could he not want to return to the club where he was born?”
“[Chelsea] are very powerful,” he said. “They have [Samuel] Eto’o, a great player, but they will think about alternatives and Costa could be one of them.
“He knows that on one side he could earn more money, but here he is going to compete. It would surprise me if the best teams in the world did not also come looking for Miranda, [Diego] Godin …
“If Costa decides to go, it will be OK with me. Our philosophy is to make players better – for us, that is something fundamental. When Falcao left for Monaco, you could not say no to him. He gave us life.”

It is expected that Chelsea will be able to activate Costa’s £32million release clause when both teams hold talks this week.

Athletico Madrid face Chelsea in the semi-final of this season’s Champions League.