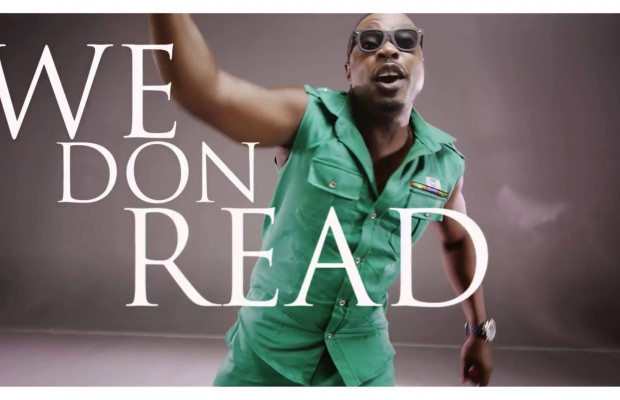 Godfather Godson is a single off a 16 track album that will be released later this year on La Cream Music label. The video was directed by Might

As a keen observer of the Nigerian politics,this single is a satire not just to entertain but more importantly to make Nigerians see beyond what is playing out on the surface on the political scene. It is a wake up call.

“I am not a politician. I don’t belong to any political party. I am a Nigerian that have a right and a say on who and how to be led. In my opinion godson is being distracted by godfather after he decided not to continue serving him but to serve Nigerians.

I am using this album to call on Nigerians to speak up and stand for what they believe in and not be confused by the propaganda they are throwing up against this administration. They should allow him continue with his transformation agenda.

“I have never met Jonathan, I am impressed by the lot he has achieved so far, that is why I am standing up for what I believe in and I know I am not alone on this.”

Eedris Abdulkareem has proven over the years that beyond being an artiste he is much more of a social crusader who is not afraid to preach that which he believes in.

It is via this path that this enigma has chosen to awaken Nigerians to the goings-on on our political turf.

He is making a clarion call to all and sundry not to sit on the fence and allow political gladiators and rabble rousers to confuse and mislead them.

I AM NIGERIA PROJECT
This is an initiative to bring Nigeria youths together to speak with one voice for what they believe in.

It is conceptualized to help address the needs and aspirations of the Nigerian youths within and outside Nigeria. With this platform we hope to challenge public officials and institutions that are performing below standards.

When there are opportunities for employment and empowerment we will through this platform push qualified members of I AM Nigeria forward.

We hope to raise a trust fund with which to help touch the lives of Nigerian youths ana discourage them from being used as thugs,arsonists and assassins by politicians.

We are already leaders but we will ensure that we come together since we as youths outnumber the adults to take over the reins of power and move Nigeria forward and make it become the true Giant of Africa.

FACE OF ‘I AM NIGERIA’ PROJECT
We made a seven year old girl the ambassador of I AM NIGERIA because the children are indeed the future leaders. We are fighting now to halt the trend that keeps suppressing the youth and making them followers. Enough is enough it is time for youths to lead.

Eliena Melekwe the face of I AM NIGERIA PROJECT was expelled from Blooms Academy, Abuja because she dorned a green white green bead on her hair. We will stand up for her and fight the injustice.

LEST WE FORGET
Having left the Remedies Amicably Abdulkareem’s solo debut album, P.A.S.S. (“Pains And Stress = Success”) was released in 2002 on Kennis Music, and it was received well by Hip-Hop fans and Music Pundits alike, and it had tracks llike So Ligali featuring Pasuma Wonder, come Back Home, and the first ever diss song by a Nigerian Rapper Wackawickee MC’s, where he took shots at Tony Tetuila, The Plantashun Boyz and Ruff Rugged and Raw.
Released the same year (and also on Kennis Music Imprint ) was the album titled Mr. Lecturer and this featured Abdulkareem’s first video hit, the album’s title track, which addressed the problem of students using money and sex to solicit higher grades in Nigerian colleges and universities, as well as Male lecturers exploiting female students and requesting sex and money in exchange for good grades.

He became the Olympic Torchbearer

In 2004, Abdulkareem’s third album, Jaga Jaga, appeared on Kennis. Its title track, which laments the corruption and suffering in Nigeria, was banned from radio airplay by Nigerian President Olusegun Obasanjo in a televised address, although it continued to be played in nightclubs.

In November 2005, Abdulkareem launched his own record label, La Kreem Music, and released his fourth album, Letter to Mr. President. The album’s title track addressed Obasanjo’s criticisms of “Jaga Jaga”; the album also featured “Flash Up Unu Lighter”, a tribute to Obasanjo’s wife, Stella, and the victims of the Bellview Airlines crash of October 2005.

Abdulkareem is also the founder of the Eedris Abdulkareem Foundation, a fundraising organization dedicated to fighting the spread of HIV and AIDS in Sub-Saharan Africa in conjunction with the Pat Utomi Foundation.

Related Topics:Eedris Abdulkareem
Up Next