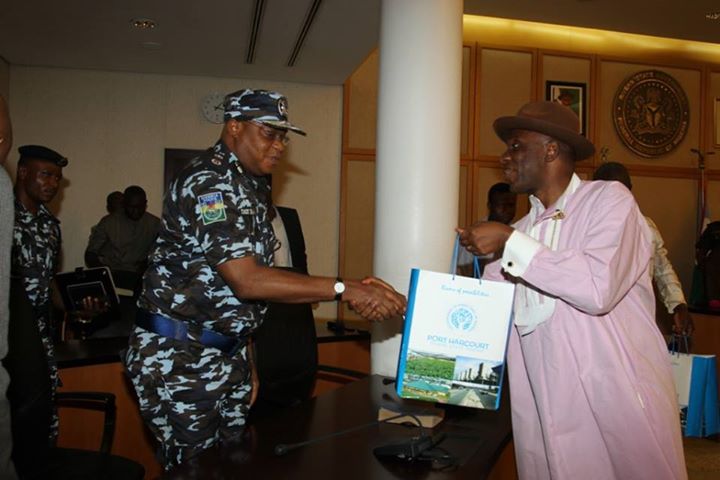 He also said his administration is willing to co-operate with the Police in the state to restore law and order as long as the Police is ready to be non-partisan and neutral.

Amaechi disclosed this Thursday when Mr. Ogunsakin and other top police officers in the State paid him a courtesy visit in Government House, Port Harcourt, Thursday.

“Don’t support PDP, and don’t also support APC. Just, support Rivers people. Any order that is illegal from the Rivers State Government, please, don’t obey…What we want is a neutral Police commissioner that is firm and understands that the state needs to accommodate everybody, and not one that loves to be in any of the political Parties. I must congratulate you, the plans you have are also well thought out, and needs the support of the Rivers State Government.”

Governor Amaechi also recalled the cordial relationship his administration enjoyed with the Military and the Police when he took over power in 2007.

“From February last year (2013) we saw ourselves gradually going back to that era. Go to our communities, these boys are back and carrying weapons and have also installed themselves as chiefs and dishing out instructions”, Amaechi said.

Governor Amaechi further narrated how his administration supported the Police in providing Armoured Personnel Carriers, (APC), bullet proof vests, scholarship programmes, Primary health centres and others, as a way of motivating the Police work force in combating crime in the state.

“If they give you the history of our support to the Police in Rivers State, you will be shocked. Please just take your time, call for all the files in the past one year and go through them. You will find out that while my colleagues were battling with other things, we were making efforts to buy Armoured Personnel Carriers (APC). It was the same APC that they were trying to use against us…We also bought bullet proof vests for the Police. We also introduced scholarship programmes, that any policeman that was shot in the cause of the crisis, we will not only train his children, we will employ the wife or give out money to the wife to start business”

“We built a Health Centre for the Police and bought vehicles for the Police. We thank you for accepting the challenge, because, what you are going to face now is a challenge. It will not be the normal police commissioner job. You are here to restore Policing. Also, know that there will be a lot of intrigues, but, I won’t be part of the intrigues. If you know me and those who know me, you will understand that. I say my mind, and I will try as much as I can to be honest”, Amaechi noted.

Earlier, the new commissioner of Police, Mr. Tunde Ogunsakin said, it is proper and of necessity that the Governor of a state and the commissioner of Police should synergize to pursue and enhance the security of lives and properties in the state. “This is the crux of my visit to your office today”.

The State Police boss also highlighted the role of the Nigerian Police as spelt out in Section 4 of the Police Act (CAP359) Law of the Federation of Nigeria 1990, to include, the prevention and detection of crime, the apprehension of offenders, preservation of Law and order, the Protection of lives and Property, as well as the due enforcement of laws and regulations which the Police is directly charged.

Mr. Tunde further indicated his intention to partner with the communities in the state and other established institutions, including relevant stakeholders and other sister security agencies.

Continuing he said, “I intend to in due course commence wide consultations and meeting with the various interest group with a view to brainstorming and looking into the grey areas. I am convinced that, this will go a long way in assisting us in arriving at a common ground towards a harmonious and peaceful co-existence. Therefore, Political activities must be effectively managed in order not to endanger the peace in the state. We shall on our part be objective, liberal, firm and non-partisan as I will deploy my expertise to manage the affairs of the Rivers State Police Command in the best possible professional manner”.

“I will strategically marshall a formidable operational plan that will speedily arrest the trend of all forms of criminalities, particularly violent crimes in the state. Consequently, I want to use this medium to sound a note of warning to all criminals in the state to either have a change of mind and become law-abiding citizens or relocate from Rivers State immediately. I encourage all law abiding citizens of Rivers State to go about their lawful business.”