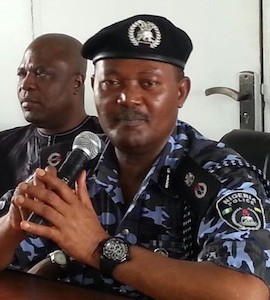 Rivers state Police commissioner, Joseph Mbu has slammed a ban on all political rallies in the state. The CP revealed that the decision is  as a result of the lingering political tension in the state.

Before putting this ban in place, the state Police command had previously instructed that rallies should only be held in the state after being granted permission by the police.
The Grassroots Development Initiative, Save Rivers Movement, and the Rivers Leadership Advancement Foundation are also affected by the ban

“Accordingly, all public activities involving rallies of Grassroots Development Initiative, Save Rivers Movement , Rivers Leadership Advancement Foundation and whatever other names, are hereby banned,” this is according to a statement signed by the Command’s spokesman, Mr. Ahmad Mohammad.

There will therefore be no security henceforth for any group which goes ahead to organize rallies.

“Rivers State Police Command will not; I repeat; will not provide security for any group in whatever guise.
“Party membership drive is allowed strictly as stipulated in Electoral Act 2010 as amended and INEC regulations, please.”

Atiku Abubakar Will Do Anything To Become President – Clark