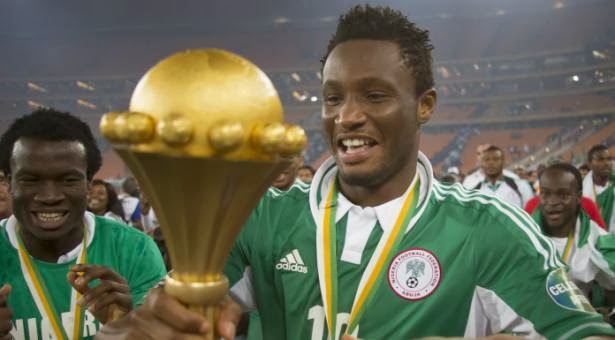 Yes! Nigerian midfielder, John Obi Mikel deserves to be African Footballer of the year simply because for the year in-view, he has been Africa’s best performer for both club and country.
Checking the antecedent of the CAF Award, you would realize that the performance of a player’s Country and Club definitely influences who wins the award.
Mikel Obi guiding Nigeria to win the Nations cup earlier in 2013 makes him closer to the crown than even Yaya Toure of Cote d’Ivoire. Winning the Europa League with Chelsea FC is another major advantage in a season Yaya won nothing major with Manchester City and wasn’t special for Ivory Coast at the Nations Cup. At the last Nations cup in South Africa, he was Man of the Match in about three different games. He also participated at the Confederations Cup in Brazil later in 2013 and even scores a brilliant goal against Uruguay whereas other contestants for the crown did not enjoy that earned privilege.
The African Footballer of the year crown seems to be a direct contest between Yaya Toure of Ivory Coast and John Obi Mikel of Nigeria. However, all things being square, I think I can beat my chest and say, ‘Congrats Mikel’ even before the gala night which comes up really soon.
Augustine Ogwo is a writer and blogs at www.austinaija.com
Follow him on Twitter: @austinaija