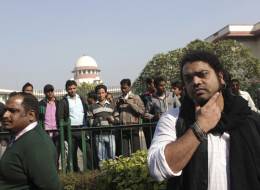 Supporters of gays, lesbians and transsexuals vowed to continue pressing for the removal of a law which makes gay sex punishable by up to 10 years in prison.

The court said in its ruling Wednesday that a High Court decision in 2009 to strike down the law was unconstitutional, as that it was for lawmakers — and not courts — to decide the matter.