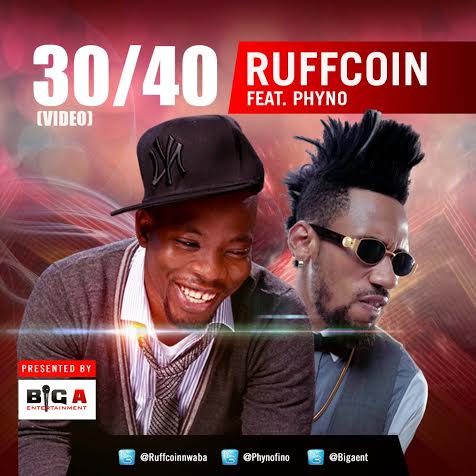 Big A entertainment presents the most anticipated rap music video “30/40 by Ruffcoin ‘Nwa-ABA’ ft Phyno, a single from the hit album ‘Diamond in the Ruff’. Since the single’s release, 30/40 has fast grown to become an anthem for the streets and the club’s favourite in the East, slowly gaining ground in the West.
30/40 which carries a hard straight talk message of “anyone who does harm to me will have it returned in 100 folds” has become an anthem in the eastern part of Nigeria, The song and it’s message does not encourage violence in anyway, instead acts as a metaphor to inspire listeners and fans to repay haters and ill wishers with ones success.
The video artistically directed by the prolific video director Mattmax features strong, vivid imagery and sequences of the dynamic rap duo Ruffcoin and Phyno delivering powerful verses in Pidgin and Igbo. With the new 30/40 video, Ruffcoin hopes to give life to the already successful single and capture the love of those who appreciate beautiful music.
30/40 is undoubtedly the best Igbo Rap collaboration to hit Africa’s airwaves.