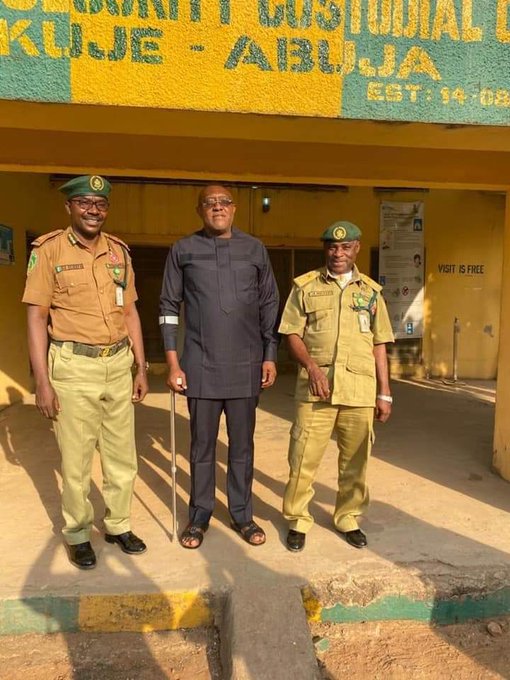 Justice Nkeonye Maha gave the order, in a ruling, following a motion on notice with charge number: FHC/ABJ/CR/05/2016 dated and filed on Dec. 21 by a team of lawyers led by Dr Oyechi Ikpeazu, counsel to Metuh.

Justice Maha ruled that the surety must be a responsible citizen and owner of landed property/properties within the jurisdiction of the court which value should not be below the bail sum.

The judge ordered that once the bail conditions were perfected, the registry of the court shall bring the release warrant for her signature to order the Superintendent of Nigeria Correctional Service, Kuje, in whose custody Metuh was remanded to release him forthwith.

“That registry of this court shall verify the property/properties with the address of the surety and depose to an affidavit of same.

“That original title deeds of the property/properties shall be deposited in the registry of this honourable court.

“That surety shall depose to an affidavit of means and submit recent passport of himself/herself for record purpose,” she held.

The judge also granted Metuh’s application to travel within and outside the jurisdiction of the court for 45 days only, beginning from the date of the order.

Maha, therefore, ordered the conditional release of Metuh’s international passport from the court registry as soon as the bail conditions were fulfilled.

“That applicant must immediately hand over his international passport to the Assistant Chief Registrar of the Federal High Court within three days from the date of his return.

“That lead senior counsel to the applicant will file an undertaking to ensure the return of the applicant’s international passport, in line with the above orders of the court,” she ordered.

The News Agency of Nigeria (NAN) reports that Metuh, through his team of lawyer led by Ikpeazu, had filed the motion on notice asking for an order abridging the time within which the application should be heard and to hear the application during the December vacation.

“An order granting leave to the applicant to bring this application, judgement having been delivered by the Court of Appeal nullifying the judgment of the Federal High Court on which the applicant is being detained in the charge.

“An order directing the release of the applicant from the custody of the Nigeria Correctional Service, Kuje, Abuja. pending when he is re-arraigned before a court of law.

“An order directing that the applicant’s international passport be conditionally released to him to enable him to visit his family residing in London upon his release.

“An order directing that until a condition for bail is made upon his re-arraignment, the applicant shall be at liberty to travel in order to see his family for intermittent periods of two months.

“And for such further order or orders as this honourable court shall deem fit to make in the circumstance,” the motion read in part.

NAN reports that Justice Maha, after reading the 15 paragraphed affidavit in support of the motion and having taken into consideration Exhibit “A”, which was the enrolled order of the Court of Appeal and that the depositions in the affidavit supporting the application on notice was unchallenged in the proceedings by Benjamin Maji, the prosecution counsel, exercised her discretional power pursuant to Section 6 of the 1999 Constitution as amended to grant Metuh’s plea. (NAN)