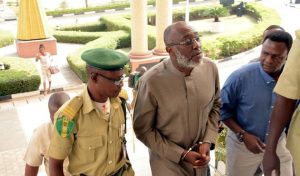 Delivering judgment in the charges of money laundering against Metuh, Justice Okon Abang ordered Metuh to pay the sum of N366m to the federal government.

The judge ordered Metuh’s company, Destra Investment Ltd should pay fine of N25m and three years imprisonment and ordered the company to be wound up.

“From the facts placed before me and I have reviewed, convict planted thorns and cannot expect to gather flowers,” he said.

The judge said he was subjected to all kinds of humiliation and attacks by lawyers and the media throughout the four years of the trial.

He said Metuh was too proud and refused to settle the case with EFCC even when confronted with the N50m he transfered to his wife, which ought to have made him sober and remorseful.

Justice Abang had earlier convicted Metuh and his company, Destra Investment Ltd on the seven-count charges filed by the EFCC against him over the receipt of N400m from former NSA, retired Col. Sambo Dasuki.