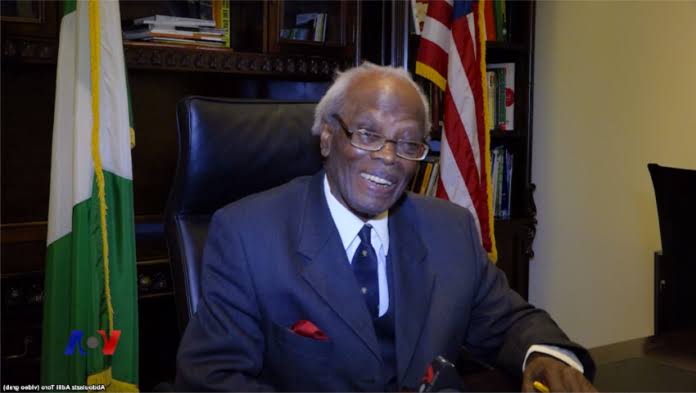 Nigeria’s Ambassador to the United States, Sylvanus Nsofor, has died at the age of 85.

A retired justice of Nigeria’s Court of Appeal, Nsofor assumed office as Nigeria’s ambassador to the United States on November 13, 2017.

He succeeded Prof. Adebowale Adefuye, who died towards the end of his tenure as Nigeria’s ambassador to US.

Born on March 17, 1935, in Oguta, Imo State, Nsofor graduated from London’s now-defunct Holborn College of Law in 1962. He also bagged an LL.M from the London School of Economics in 1964.

Even though the Nigerian Senate had rejected his nomination at the time, President Muhammadu Buhari insisted on his appointment by resubmitting his name to the upper legislative chamber in April 2017.

President Buhari in a statement issued by his Senior Special Assistant on Media and Publicity, Mallam Garba Shehu on Friday in Abuja, has directed the Ministry of Foreign Affairs to work with Justice Nsofor’s family on the burial arrangements.

In a telephone call to Jane, the widow of the retired justice in New York on Friday, the President described Ambassador Nsofor as “an outstanding judge of rare courage and truth who is not afraid to give justice to whom justice is due.”

Buhari on Friday left Abuja for his hometown, Daura in Katsina State