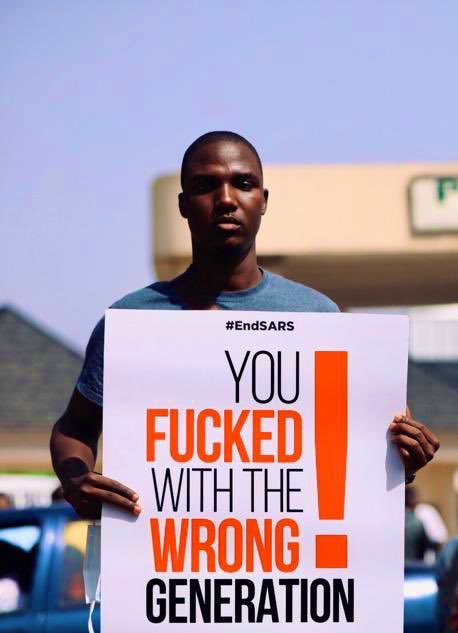 Fighting for freedom from foreign lands.

As millions of Nigerians marched in protest for good governance, millions more fought thousands of kilometres away from their homeland through their mobile phones.

Nigeria’s Independence Day was followed by massive youth protests against a brutal division of its police force: The Special Anti Robbery Squad. It began as an online campaign and one week after, notable international artists, musicians, footballers, and even Nigerian state governors had joined the protests. In eight days, it had become a global movement for change. A key contribution to this movement has been Nigerians living in the diaspora. This group has been at the forefront of the internet end of the protests – retweeting, sharing, debating, demanding and funding the fight from foriegn lands.

Nigeria’s diaspora community are alive and active politically everyday, but they exert influence mostly through Social Media. Apps like Twitter, Facebook and WhatsApp have allowed members of this community to mobilize themselves without structures, without leadership, and without profit towards better governance in their homeland. Protest marches were held in the United States, the United Kingdom, Germany, Canada, Belgium, and even on African soil in Egypt.

These protests reveal a deep divide between the youths and Nigeria’s political class. There is some irony to this movement – youths have often been taunted by Nigerian politicians about not being able to ‘go out there on the streets’. But recent political advocacy through protests have shown better mobilizations and organizations than most protests of the past. A few days into the protest, the SARS had been disbanded, but protesters are pushing for more – demanding the complete overhaul of repressive police systems.

Feminists fired the first shot. After that, we all assembled like the ‘Avengers’.

The EndSARS protests are aimed at Nigeria’s political class. Leadership has been a real part of the struggle in Nigeria. Names of activists and leaders of liberation movements are endless. But this time, like the remarkable Aba women riots of 1929, women led the charge, the faces in front of the #ENDSARS protests are those of fierce and relentless Nigerian women. Images of notable activist Aisha Yesufu, wrapped in her Hijab, fists up, and standing eye to eye against armed police officers has remained a source of inspiration and fearlessness among protests. She also narrates walking through a rain of bullet fire from policemen during the protests.

The protests have also seen the rise of Nigeria’s feminist group Feminist Co. A group that has undoubtedly changed the modalities of protesting in Nigeria. Through this group, protests have been funded and structured to proceed without violence and mayhem. Feminist co raised money to provide free medical treatment for protesters, provided food supplies, curated legal aid towards releasing illegally detained protesters, and even cleaned the streets after protests.

The protests come directly after the country began to open up following the global coronavirus lockdown, an incident that has delivered a terrible blow to Nigeria’s economy. The Nigeria Centre for Disease Control recently released a manual for the safe reopening of schools amidst rising cases across the world. But health security expert Akinloluwa Olaoluwa says police brutality is just as deadly as the virus.

“Hospitals are constantly overrun with cases of people shot by the police. This is also an epidemic. We have been waiting to address it. Feminists fired the first shot, after that, we all assembled like the Avengers. We all know that whether we get closure or not, police brutality will continue wherever they feel they can get away with it. What we don’t want, is that the government goes away patting themselves on the back for thwarting this movement, and things remaining the same.”

There is some credit to the government’s response to the protests. The Nigerian government which began its response by disbanding the SARS unit (for the fifth time), has been leaning on subtle measures such as face mask enforcement and a scheduled military parade. The Inspector General of Police has called on all members of the police force to desist from engaging protesters with violence.

Protests are still ongoing in the United Kingdom urging the Nigerian government to fulfill its pledge on the promise to its citizens. Nigerians in the diaspora are pushing the fight daily online. The National Commission for Refugees, Migrants and Internally Displaced Persons (NCFRMI) says that there are over 17million Nigerians spread out across the world. This group, in 2018 alone, contributed seven times more than foriegn aid and eleven times more than the countries Foriegn Direct Investment into Nigeria.

In Belgium, Nigerians living in Brussels converged around the European Union, and headed to the Nigerian embassy to deliver a letter to President Muhammadu Buhari requesting that the government falls on the side of history. One of those who delivered the letter to the embassy Oyinkansola Awolo stated that:

“We realize the protests don’t just affect people at home, and want a better Nigeria to come back to.”

As the protests morphs towards violence and mismanagement, many protesters worry that their efforts have been hijacked as all other political movements of the past. But many more are positive about what has happened. Nonso Jideofor, Founder of Present Labs, an NGO dedicated to building plural societies says that the protest is a win for Nigeria’s democracy:

“No matter what happens, we know a couple of things won’t be lost – it won’t be because we were taken for granted. We won’t suspect that someone sold out. We won’t forget the emergency response or bravery in leadership that feminists have shown. The solidarity we have gained won’t be lost. The chance that Nigeria can work out won’t diminish. That hope in the future – the graceful crossing of age long divides, ethnic and religious, might have been breached for good. Or at least, we have seen that it is possible to breach.”

There are some contexts to these opinions. In the midst of the protest, the leaders of the 19 northern states reached out to President Muhammadu Buhari, that they wanted the SARS unit to remain with the argument that: “SARS is not made up of bad elements alone as it also includes personnel who are  doing their work diligently.’
There are clearly some wins in the protests, on both the side of the government, and the protesters. Protesters were able to overcome deep historical resentments that had created a divide between youths in the northern and southern parts of Nigeria. In the midst of the protests, Muslims were given spaces to hold their Jumma’a (Friday service) prayers in Abuja and Lagos. On the side of the government, state governors took to the streets to also support the protest, among them the Deputy Governor of Oyo state who voiced out that he had also been a victim of SARS.

#EndSARS: Did the Nigerian Government kill its citizens and tried to erase all the evidence?