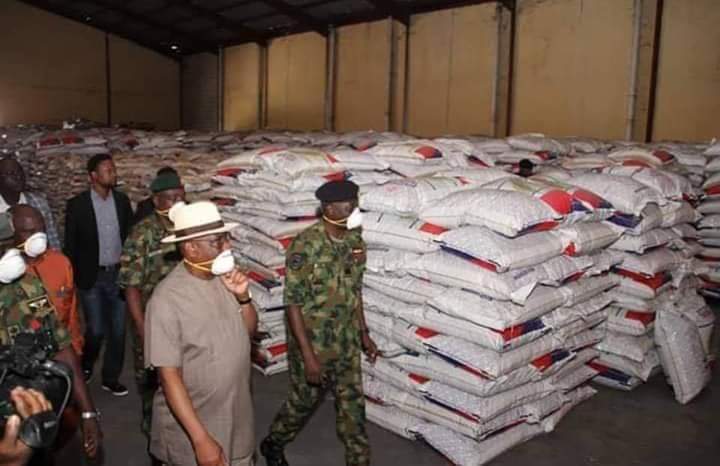 Claim: Some social media users posted pictures of the Rivers State Governor, Nyesom Wike, with soldiers in a warehouse containing hundreds of food items, claiming Gov. Wike was re-inspecting COVID-19 palliative warehouse in Port Harcourt to ensure nobody tampers with it.

FALSE: The pictures are old pictures traced to April 2020.

With the rampant looting of COVID-19 palliative items in many parts of  Nigeria, there have been several videos and images posted on social media of Nigerians looting several items which include edible items, refrigerators, chairs among others. One of the images posted was that of Rivers State Governor, Nyesom Wike, with a caption that he was re-inspecting COVID-19 palliative in Port Harcourt to ensure no one tampers with it.

On October 24, a Facebook user ForumFred Fred posted pictures of Governor Nyesom Wike inspecting COVID-19 palliative to ensure nobody tampers with it.

Fred’s post reads, “Just In: Gov. Wike re-inspects Rivers Palliative warehouse in Port Harcourt. He assures nothing and nobody will tamper what he suffered to get”

As of October 26, the post had garnered 26 Comments, 49 Shares, and 49 Likes which include Reactions.

Another respondent, Oforji Chinonso Jennifer wrote, “Why are you hoarding it na,” questioning the governor.

On the other hand, Martin Eke debunked the post with the words, “These are old pictures.” Uchechi Nwafor also responded, describing the pictures as old.

So far, the posted claim has garnered 26 retweets and 47 Likes

A check on Google reversed image shows the pictures are old and was first posted on April 5, 2020.

Similar pictures were used by several media organizations to describe the event of the pictures, such as the Rivers State-owned Newspapers, The Tide, TheNews, The Nigeria Insider News among others.

Also, a check by Dubawa on the Governor’s official Twitter handle and Facebook shows that since the reports of looting spree, Rivers State Governor has not made any public statement concerning re-inspection of COVID-19 palliative warehouse. The Governor has always updated his events on social media to enable the general public to see the happenings.

Also, no media outlet, within and outside the state has reported  Governor Wike’s re-inspection of COVID-19 palliative warehouse in Port Harcourt. A check by Dubawa confirms.

Conclusion
The claim that Rivers State Governor, Nyesom Wike, re-inspected COVID-19 palliative recently is false. The pictures are old and date back to April 2020

This fact-check is produced under the auspices of the Dubawa 2020 Fellowship IN partnership with NEWSWIRE, NGR to facilitate the ethos of “truth” in journalism and enhance media literacy in the country

Related Topics:WikeFact Check
Up Next