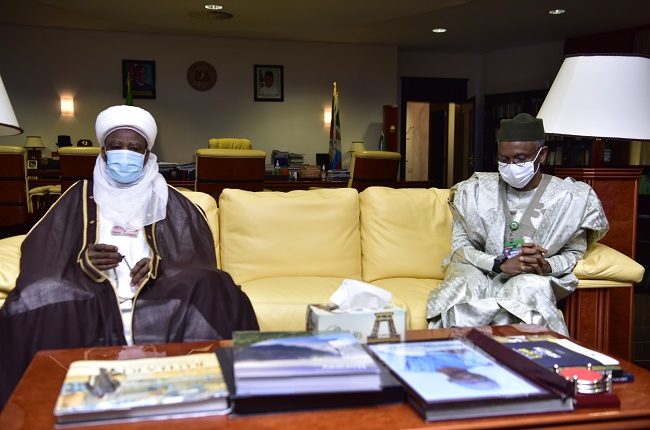 Their meeting took place 24 hours after the visit by former Emir of Kano Muhammadu Sanusi ll.

The Sultan, who arrived around 12:20 pm was received by the Secretary to the state Government, Balarabe Abbas, Chief of Staff, Muhammad Sani Dattijo, and State Commissioner for Internal Security and Home Affairs, Samuel Aruwan.

The Kaduna State Commissioner for Local Government and Chieftaincy Affairs, Jafaru Sani Ibrahim, was also part of the officials who received the Sultan.

The Sultan immediately went into the closed-door meeting with the governor which lasted about an hour. After the meeting, the Sultan refused to speak with journalists as he smiled and entered his vehicle, saying: “I came to see my brother.”

Speaking with journalists, Governor el-Rufai, who described the sultan as his elder brother, said he was there for a private visit only and to show support for the measures taken to promote peace in the state.

“He came on a private visit to talk to me, to advise me, to guide me and also expressed his support for our efforts at bringing peace to Kaduna State.

“He is happy that many people have come all talking about peace and felt he should not be left out particularly in light of our historical relationship, not only as Barewa old boys but as my elder brother.

“We discussed many things, but what the sultan and I discussed is private between us and not something that I will go into except to say that I’m grateful to him for the visit, for the support and for his affection all the time.

“He knew me ever since I was 12 years old and he used to advise us on what we need to do and how we can achieve peace and progress of the state and Nigeria in general,” he said.

Speaking on recent peace deal meeting in Southern Kaduna, el-Rufai expressed happiness saying his concerned always is to see how people can live in peace with each other in the state.

“All humans are equal before our creator so your neighbour should be considered as your blood relation.

Both Islam and Christianity teach us to love for others what we love for ourselves. Therefore, we are happy with what the Chief of Atyap started may God reward him for inviting all the ethnic groups under his chiefdom and agreed to live in peace and harmony,” he said.

I am not distracted with 2023 says Yakubu Dogara