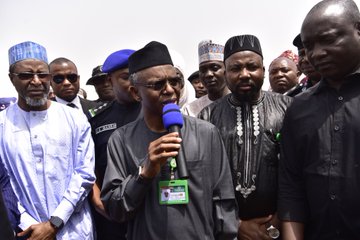 Nasir el-Rufai, governor of Kaduna, has apologised to residents of the villages attacked in Igabi and Giwa local government areas of the state over the attacks that reportedly led to the deaths of more than 50 persons.

A local guard had told VOA Hausa that suspected bandits raided different villages on Sunday, killing the residents and setting their corpses on fire.

Accompanied by Ali Janga, the state commissioner of police, el-Rufai said his administration would never negotiate with bandits.

In case you missed it… Update: Over 50 corpses been recovered from attacks Kaduna Villages

“If not for the security agencies prompt intervention they would have wiped out the entire villages,” NAN reports.

“I also came to apologise for failure to protect you fully, we are doing our best to minimise such incidents, you should continue to forgive us.

“But we are doing the best we can and we are hoping that this banditry issue will be addressed because security personnel are on ground to manage the situation.

“In Kaduna, we have vast land, if the security close one area they attack another area.”

The governor said it is the duty of his administration to “wipe out” the attackers.

“It is our duty to wipe them out, and until we send them to their maker, the security agencies are taking the war to the forest and we are eliminating them, ” he said.

“But I am grateful to the air force, army, police and the DSS for being always prompt otherwise it would have been worse.”

El-Rufai urged the people to continue to be patient and vigilant and support the government and security agencies to win the war against the bandits.

30 people have been killed while several others injured in Kaduna

Update: Over 50 corpses been recovered from attacks Kaduna Villages