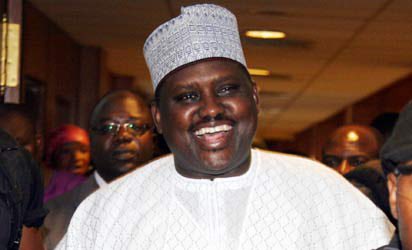 Fatima Abdullahi, younger sister to Abdulrasheed Maina, ex-Pension Reform Chair, on Wednesday, told the Federal High Court, Abuja, that she was not aware of the companies and bank accounts opened in her name by her brother.

Fatima, who told Justice Okon Abang that she shared the same parents with Abdulrasheed, said she became aware of the companies when she was arrested by EFCC operatives in Kaduna.

Fatima, a civil servant, who gave evidence behind a screen where her face could only be seen by the judge, was the second prosecution witness to testify in the ongoing trial.

Testifying, the witness said she had never heard of companies called Common Input & Investment Nigeria Ltd, Kangolo Dynamic Clinic Services and Drew Investment Ltd. until around August 2019 when she was arrested.

“Sometimes in August, 2019, I went to the ATM of Diamond Access Bank to withdraw some money.

“Unfortunately, I could not. So, I went inside the bank to see the manager to complain. The manager told me to hold on, that he would find out the reason.

“After waiting for an hour, the manager told me that I was under arrest and he took me to an office and asked me to wait for the EFCC officials to come and take me to their office in Kaduna.

“That was when the manager told me that my accounts were blocked.

“So when the EFCC official came, they took me to their office for questioning. When we got there, the officials were asking me if I know any company by the name Common Input, to which I told them I do not.

“In fact, that was the first time I was hearing about the name.

“They told me that there was a transaction in Common Input and I told them I am not aware of the transaction. So, they made me to write a statement.

“Afterwards, I was given an administrative bail on the same day and that I should proceed to the EFCC office in Abuja the next day.

“The next day, I went to the Abuja office of EFCC together with my lawyer. The officials also asked me if I know any company by the name Common Input, to which I say I do not.

“So, they presented a CAC incorporated form of the company where the name Fatima Samaila Abdullahi was stated together with my date of birth but the phone number on the form is not my own.

“Even the name as stated on the form is not my name because my full name is Fatima Abdullahi,” she narrated.

Fatima also told the court that her signature was neither the one on the form nor the one on another CAC incorporated forms for Kangolo Dynamic Clinic Services and Drew Investment.

“So, I was asked to write a statement, which I did.

“Also, I was shown an account opening package of Common Input and Drew Investment with UBA.

“I was shown a BVN, which is my BVN and I told them I don’t know anything about those accounts.

“I was never given any form to sign in respect of those accounts before and I have never made any deposit or withdrawal from Drew Investment, Common Input and Kangolo.

“The other accounts I have are in GTBank, Access, Fidelity and First Bank,” she said.

According to Fatima, all my genuine accounts were blocked together with those fictitious accounts.

The witness also denied knowledge of shares bought in her name in the companies, adding that the photograph attached to the documents was a younger version of her before she got married.

Jusrice Abang then adjouened the matter until Dec. 16 for continuation of the cross-examination and hearing of the bail variation application filed by Maina.

Related Topics:PensionAbdulrasheed Maina
Up Next

Punch Newspaper will now refer to Buhari as ‘a military dictator in the 80s, Major General’