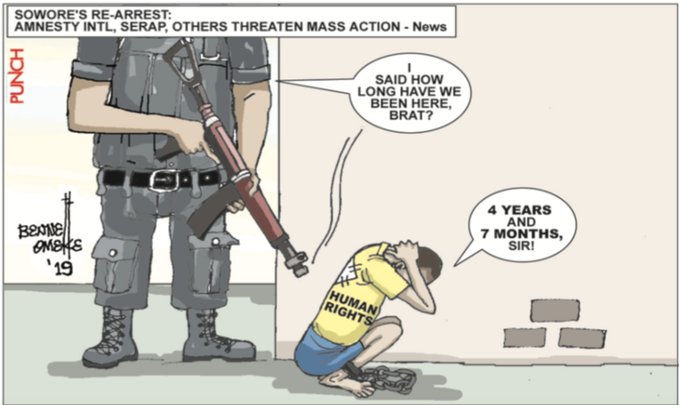 Nigeria’s Punch Nigeria Limited in its latests editorial takes a stand about the style of governance and state of affairs across Nigeria under the Muhammadu Buhari Presidency.

In its editorial, the widely read newspaper declared, and the statement reads, “As a symbolic demonstration of our protest against autocracy and military-style repression, PUNCH (all our print newspapers, The PUNCH, Saturday PUNCH, Sunday PUNCH, PUNCH Sports Extra, and digital platforms, most especially Punchng.com) will henceforth prefix Buhari’s name with his rank as a military dictator in the 80s, Major General, and refer to his administration as a regime, until they purge themselves of their insufferable contempt for the rule of law.”

This is not the first time the paper will take on regimes, it began to take on a political stance, mostly against the Shagari regime. Supposedly, days before the end of the administration of Shagari, a few Puncheditors were aware of a coupapproaching and injected strong anti-government tones in their reporting.

The editorial stand reads in parts,

The entire country and a global audience are rightly scandalised by the unfolding saga over Omoyele Sowore and the unruliness of the SSS and the government; but it is only a pattern, a reflection of the serial disregard of the Buhari regime for human rights and its battering of other arms of government and our democratic institutions. PUNCH views this tendency and its recent escalation with serious concern, knowing as the great thinker, Edmund Burke, said that “the only thing necessary for the triumph of evil is for good men to do nothing.” Nigeria had trod a path, a veritable obstacle course, where repression, especially under military jackboots, was a malignant presence and this attracted heroic resistance by ordinary people, civil society groups and the press. But Nigerians have lately become lethargic, divided by ethnic and sectarian sentiments and weakened by widespread poverty brought on by a rapacious political class and bad governance.

PUNCH will not adopt the self-defeating attitude of many Nigerians looking the other way after each violation of rights and attacks on the citizens, the courts, the press and civic society, including self-determination groups lawfully exercising their inalienable rights to peaceful dissent. This regime’s actions and assaults on the courts, disobedience of court orders and arbitrary detention of citizens reflect its true character of the martial culture. Major General Muhammadu Buhari (retd) ran a ham-fisted military junta in 1984/85 and old habits obviously run deep.  Until he and his repressive regime purge themselves of their martial tendency therefore, PUNCH will not be a party to falsely adorning it with a democratic robe, hence our decision to label it for what it is – an autocratic military-style regime run by Major General Muhammadu Buhari (retd).

For more about the Punch Newspaper editorial, you can visit their website

The Punch was not immune to the excess of authoritarian regimes in the country. In 1990, its editor was jailed for 54 days. In 1993 and 1994, the publishing house was closed on the direction of the nation’s ruler.