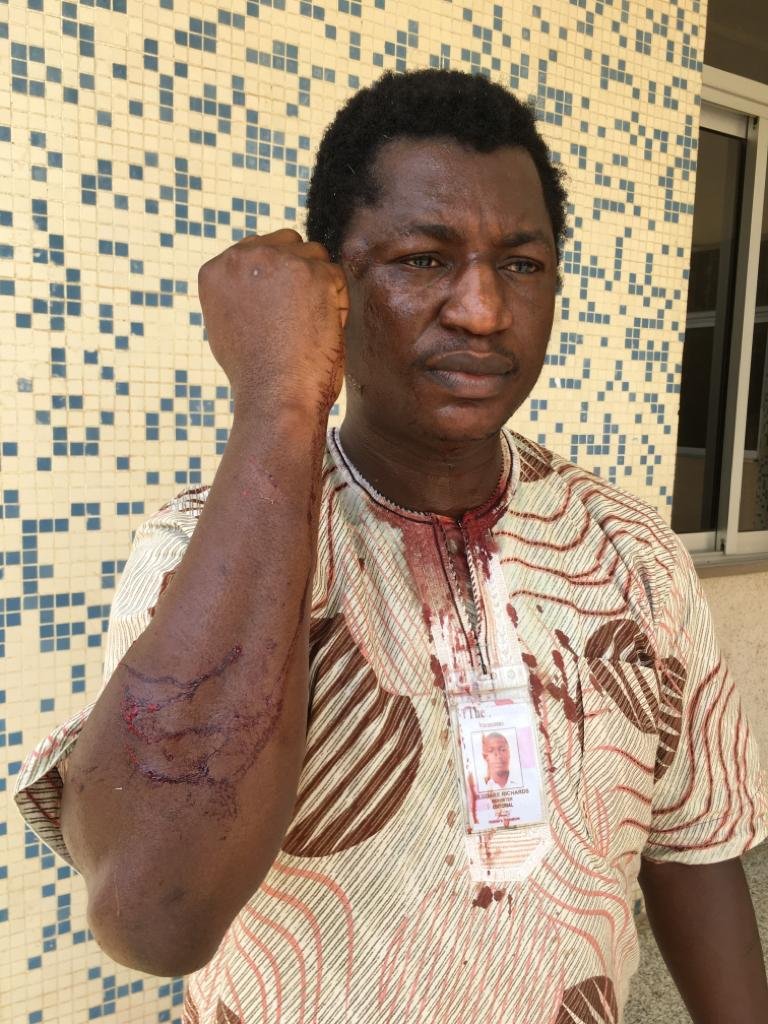 A number of Nigerian Journalists were Tuesday assaulted and their camera destroyed when protesters gathered to demand the release of detained activists Omoyele Sowore and Olawale Bakare at the premises of the  Department of State Services in Abuja.

Two journalists with Guardian Newspaper and Galaxy TV, Richard Oludare and Walter, were beaten and seriously injured by the DSS officials.

The Nigerian Union of Journalists, FCT Council, in reaction to the violent assault has warned that it is a dangerous time to be a journalist in Nigeria given the near-daily intimidation, harassment and detention of journalists in the country.

“deeply troubling the conduct of operatives of the State Security Service”

In a statement by chairman of the council, Comrade Emmanuel Ogbeche, Tuesday in Abuja, he described as unfortunate and deeply troubling the conduct of operatives of the State Security Service also known as Department of State Security against journalists that had gone to cover a sit-out of activists demanding for the release of Omowole Sowore, detained publisher of Sahara Reporters, that had fulfilled his bail conditions as set out by a competent court.

“From reports and videos from our members who were on ground in the legitimate pursuit of the calling as journalists to cover a sit-out at the SSS Headquarters in Abuja that they were harassed, intimidated, tear-gassed and even arrested and detained speaks to a more sinister and perilous time to be a journalist in Nigeria,” Ogbeche said in the statement.

“Today, it has become a recurring decimal for journalists and media practitioners to be at the receiving end of security operatives in the pursuit of their constitutional guarantee to collate, disseminate and hold government and its officials accountable to the Nigerian people.

“What is even more troubling is that security operatives now believe that they have official backing of the State to so maliciously assault journalists.

“The NUJ FCT Council wishes to state that these abuses have dire repercussions on the Nigerian State as a fragile democracy and those who are responsible for this should be advised that they will be held accountable,” the statement further stated.

According to the NUJ Chairman, Richard Oludare of The Guardian Newspapers was badly beaten leaving scars on his body, while many TV cameras were damaged in the process.

He called on journalists not to shirk their responsibility to Nigerians right to information in this difficult times as history has shown that the pen will always triumph over dictatorial tendencies.

According to Amnesty International, at least 19 journalists and media practitioners have been attacked in Nigeria between January and September 2019, the highest since 2015.

Nigeria was one of the focal points for discussion when over 200 journalists across Africa gathered in Ouagadougou, Burkina Faso, for a conference on free speech and freedom of expression in September – it was revealed that under Buhari, Nigeria recorded worst attacks on journalists in 34 years.

According to the research, as at May this year, the total number of physical attacks on reporters was 189; equipment searches and seizures, 9; equipment or property damage, 17; arrests, 60; denial of access, 21; threats, 44 and ‘harassments’, 12.

“alarming trend of media censorship by state authorities in Nigeria.”

A media coalition has also condemned the “alarming trend of media censorship by state authorities in Nigeria.” The Coalition for Whistleblowers Protection and Press Freedom (CWPPF) said it observed that “public officers and influential individuals are increasingly intolerant of critical reporting and fair comments by journalists.”

“The Coalition for Whistleblowers Protection and Press Freedom (CWPPF) notes the alarming trend of media censorship by state authorities in Nigeria. We observe that public officers and influential individuals are increasingly intolerant of critical reporting and fair comments by journalists. They, therefore, resort to the use of instruments of state criminal justice system to suppress freedom of expression and free press. From January 2019 till date, we have recorded 71 attacks on the media, including arrests, intimidation, detention and killings. We, as a coalition, totally condemn this abuse of power by state actors and security agencies.”

Related Topics:Press Freedom
Up Next

If you think it is not our negligence, go to Onitsha and attempt to kidnap their children – Emir Sanusi