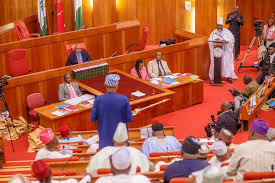 Press Releases
Worried by the multi-dimensional security challenges facing the nation, the Senate in collaboration with the President Muhammadu Buhari and the Executive arm will on Thursday, February 1 and Monday February 5 convene a National Security Summit.
The Summit will provide an all inclusive platform for heads of security and defence agencies, Governors, traditional rulers, socio-cultural groups, civil society organizations and others, with a view to finding solutions to acute and long term security challenges in the country.
It will be recalled that the Senate had on January 17, while deliberating on the interim report submitted by its adhoc committee on review of security infrastructure led by majority leader, Senator Ahmed Lawan, on the crises that erupted in Benue, Taraba and Adamawa States, resolved to convene a summit to interface with security agencies and other critical stakeholders to find a lasting solution to the issue and other related security challenges.
The two-day Summit, according to a statement by the chairman of the ad-hoc committee and Senate Majority Leader, Sen. Ahmed Lawan, will also review the challenges being faced by security agencies in the performance of their duties and charting the way forward towards resolving the issues involved.
The statement noted that though the summit was an initiative of the Senate as part of it’s contribution to the resolution of the rising security challenges, it is being convened in partnership with the Presidency to find a common solution to the issue.
President Buhari, according to the statement, will declare open the summit to be held at the Banquet Hall of the State House on Thursday with all the 36 state governors in attendance.
Other participants at the event include all Senators and members of the House of Representatives, Ministers of Defence and Interior, Chief of Defence Staff (CDS), Service Chiefs and other heads of security agencies.
Others expected to participate in the two-day summit are selected traditional rulers from across the six geo-political zones, representatives of regional socio political organizations, Nigerian Supreme Council for Islamic Affairs (NSCIA) and Christian Association of Nigeria (CAN).
Other stakeholders invited to the summit are the Miyetti Allah Cattle Breeders Association of Nigeria (MACBAN), All Farmers Association of Nigeria (AFAN) and Civil Society Organizations (CSOs).
Signed:
Senator Ahmad Lawan
Senate Majority Leader and Chairman, Senate Adhoc Committee on Security Infrastructure