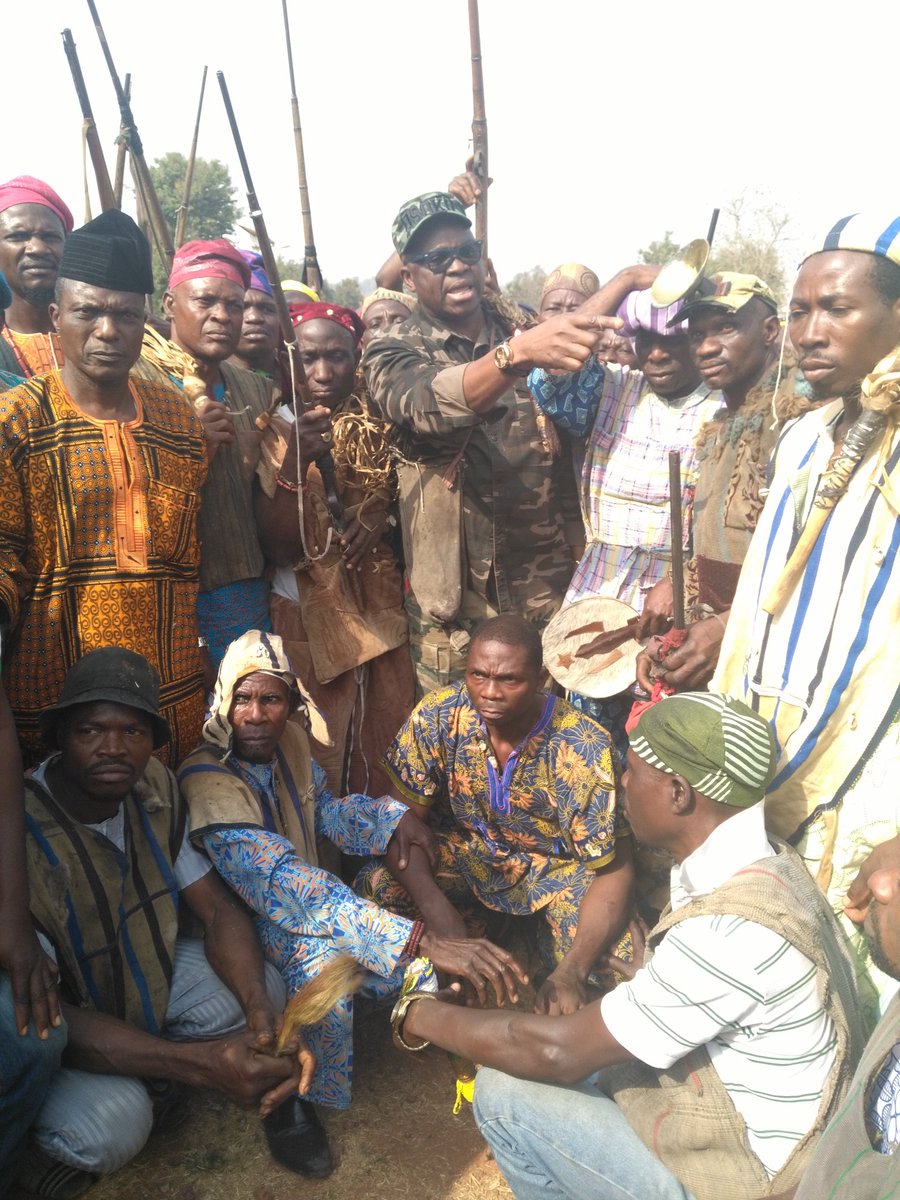 Ado-Ekiti-Governor Ayodele Fayose has raised the alarm that some Fulani herdsmen have started a surreptitious move into the outskirts of Ekiti with an alleged aim to kill and maim people.

Fayose who said the move was targeted at rubbishing his anti-grazing law, said the invaders would be met with stiff resistance from the people of the state.

Fayose said this Wednesday during his meeting with all local hunters from the 16 local government areas of the state and charged them to secure the state.

Fayose who equally hosted the Benue people residing in Ekiti expressed his sympathy for them, saying: ” I sympathise with our brothers, sisters and people from Benue State that are mourning the brutality of those who killed their kinsmen. The governor who observed a minute silence for the dead in Benue, was clad in a military uniform.

He said : “This (uniform dressing) is done to charge our hunters to secure the state. I saw pictures of the killings and I wondered if those were human beings. I asked the questions if people could be that picked to kill human beings that way. They will find no peace. It is no tribal killings but that of mindless people. Blood of departed will find those people and they won’t know peace. It is the duty of FG to protect its people. We are not protected. ” We have never had it so bad. People must come to leadership with conscience. The Federal Government should have sent the army not a police. ” Governor Ortom should fasten his belt and protect his people. Those seeking for help in Abuja would not find because Abuja also needs help. I sympathise with you, this is your home and nobody would kill you. You are all saved here, ” he said.

Charging the hunters who were quite excited to meet him, governor Fayose said: ” I have received letters that the Bororos have entered our reserves they want to violate our laws. I want to call on the attention of the FG that they have come and wanted to kill men and kids and women in Ekiti. We will nit allow that to happen. I want you all he hunters to go back today to protect your people, be vigilant, open your eyes, make sure everyone entering our state is screened. No one in the guise of grazing should enter our land after 8pm. For our brothers who harbour criminals , tell them Ekiti is a no go area. If your plan is to make this state ungovernable you are wasting your time. I have called this meeting for everyone to be vigilant. I will begin to support you now to secure Ekiti. Don’t let them take you by surprise. Don’t allow them to take Ekiti by storm. Go to the farms and keep vigil. Don’t just l entertain visitors that come in the night, screen them. We don’t want visitors in our games at 8pm. ”

“Don’t take laws into your hands but defend our people. Protect our people check all arrivals at night coming in the guise. I am making a line available where you can recall distress calls. I trust you that you can secure our people. I want to appeal to our people from Benue to pray for your state and your governor. I also leant that they want to come and be arresting people for no reasons. They would meet Gods hand in it. My hunters, you know Ekiti very well. Protest the state. We will be having monthly meetings”