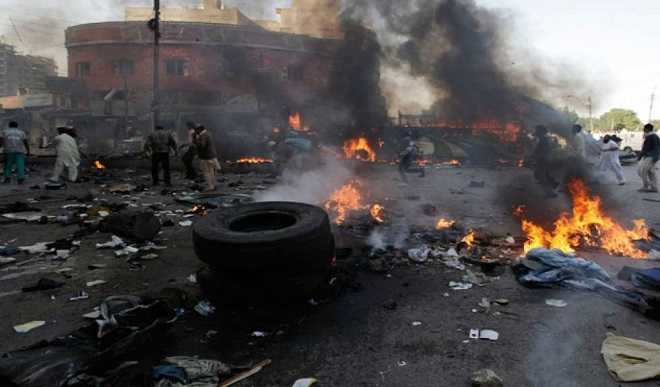 A teenage suicide bomber blew himself up as worshippers gathered for morning prayers at a mosque in north-eastern Nigeria, killing at least 50 people, police said on Tuesday, in one of the region’s deadliest attacks in years.

The blast happened during early morning prayers at the Madina mosque in the Unguwar Shuwa area of Mubi, some 200km (125 miles) by road from the Adamawa state capital, Yola.

Police spokesman Othman Abubakar said they were “still trying to ascertain the number of injured because they are in various hospitals”.

While there was no immediate claim of responsibility, the attack bears the hallmarks of Boko Haram. The Islamist group is based in neighbouring Borno state and has been blamed for scores of similar attacks in crowded public places, such as mosques and markets, over the years.

Asked who was responsible, Abubakar said: “We all know the trend. We don’t suspect anyone specifically but we know those behind such kind of attacks.”

Boko Haram has increasingly been using teenagers or young women as bombers, many of whom have been abducted.

The police spokesman said the young man detonated his explosives while mingling among the worshippers.

In recent months, Nigeria’s military has flushed Boko Haram from its forest stronghold but President Muhammadu Buhari’s claim late last year that the extremist group had been “crushed” has proven to be premature.

Boko Haram has been blamed for more than 20,000 deaths during its nearly decade-old insurgency, which has spilled over into neighbouring countries and displaced millions of people, creating a vast humanitarian crisis.

Abubakar Sule, who lives near the mosque, told Agence France-Presse he had just returned home when he heard the blast.

“I was there when the rescue was on and 40 people died on the spot and several others were taken to hospital with severe and life-threatening injuries,” he added.

“The roof was blown off. People near the mosque said the prayer was mid-way when the bomber, who was obviously in the congregation, detonated his explosives.”

Boko Haram briefly overran Mubi in late 2014 as its fighters rampaged across north-eastern Nigeria, seizing towns and villages in its quest to establish a hardline Islamic state.

The town’s name was changed temporarily to Madinatul Islam, or “City of Islam” in Arabic, during the Boko Haram occupation.

But it has been peaceful since the military and the civilian militia ousted them from the town, which is a commercial hub and home to the Adamawa State University.

In recent months, Boko Haram activity has been concentrated on the far north of Adamawa state, around Madagali, which is near the border with Borno state.

This month, at least two civilians were killed when dozens of Boko Haram fighters tried to storm the town of Gulak but were repelled by soldiers.

There have been repeated suicide bombings in the area, which is near to the Sambisa forest area of Borno, where the militants had a base.

Boko Haram fighters are also said to be hiding in the Mandara mountains, to the east of Adamawa state, which forms the border with neighbouring Cameroon.

Associated Press and Agence France-Presse contributed to this report